Just because it needs to be said…..Today Hillary Clinton gave her opinion on the closing of the Mueller Report. She wasn’t witty enough to create her own quote. She stole one from Winston Churchill quicker than she stole the White House china. Churchill said, “Now this is not the end. It is not even the beginning of the end. But it is, perhaps, the end of the beginning.”

“When Attorney General William Barr finishes all the pending investigations that will determine what triggered the groundless witch hunt by Mueller, it may very well be the Blissful End of Obama, Hillary and all their Merry Band of 2016.”

“Lest we forget at least an over-the-shoulder acknowledgment to the very first radical: from all our legends, mythology, and history (and who is to know where mythology leaves off and history begins – or which is which), the first radical known to man who rebelled against the establishment and did it so effectively that he at least won his own kingdom – Lucifer.”

(The dedication of his book “Rules for Radicals” to Lucifer)

“The American dream ended (on November 6, 2012) in Ohio. The second term of Barack Obama will be the final nail in the coffin for the legacy of the white Christian males who discovered, explored, pioneered, settled and developed the greatest Republic in the history of man. A coalition of blacks, Latinos, feminists, gays, government workers, union members, environmental extremists, the media, Hollywood, uninformed young people, the “forever needy”, the chronically unemployed, illegal aliens and other “fellow travelers” have ended Norman Rockwell’s America. The cocker spaniel is off the front porch… the pit bull is in the back yard. The American Constitution has been replaced with Saul Alinsky’s “Rules for Radicals” and Chicago shyster, David Axelrod, along with international socialist George Soros will be pulling the strings on their beige puppet to bring Act 2 of the New World Order.

Our side ran two candidates who couldn’t even win their own states, and Chris Christie helped Obama over the top with a glowing “post Sandy” tribute that elevated the “Commander-in-Chief to Mother Teresa status. People like me are completely irrelevant, and I will never again comment on or concern myself with the afore mentioned coalition which has surrendered our culture, our heritage and out traditions without a shot being fired. You will never out-vote these people. It will take individual acts of defiance and massive displays of civil disobedience to get back the rights we have allowed them to take away. It will take Zealots, not moderates and shy not reach across the aisle RINOs to right this ship and restore our beloved country to its former status.

Those who come after us will have to risk their lives, their fortunes and their sacred honor to bring back the Republic that this generation has timidly Frittered away due to “white guilt” and political correctness.”

If there were as many rhinos in Africa as there are RINOs in Washington D.C., then they would not be endangered.

BREAKING NEWS: DNA test have revealed that Elizabeth Warren has more Native American in her than Mitt Romney has Republican in him. 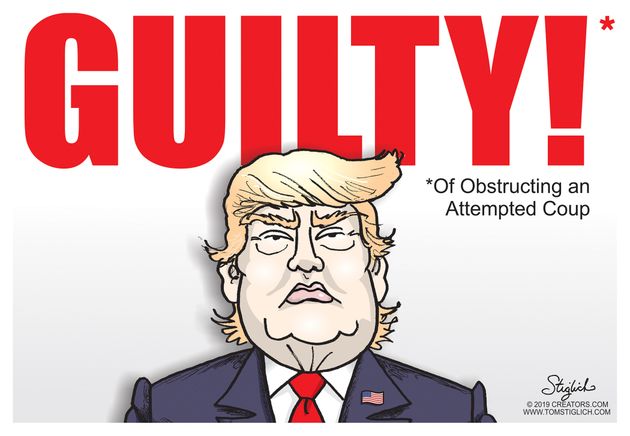 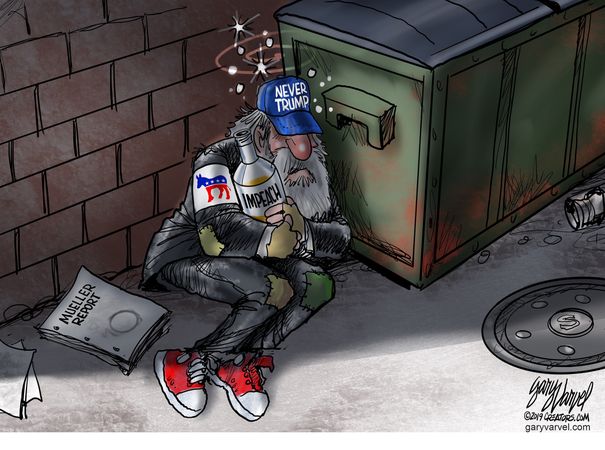 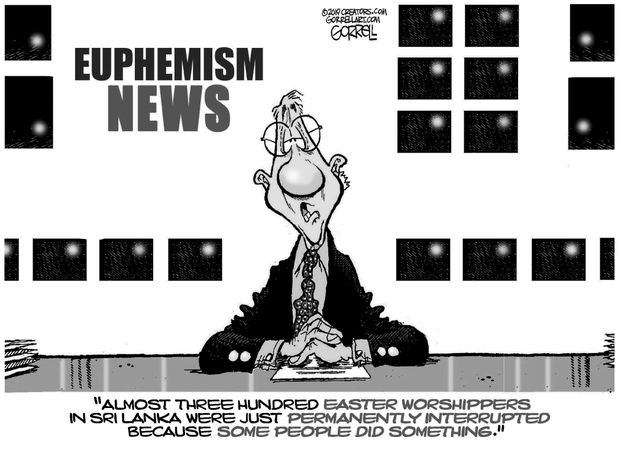 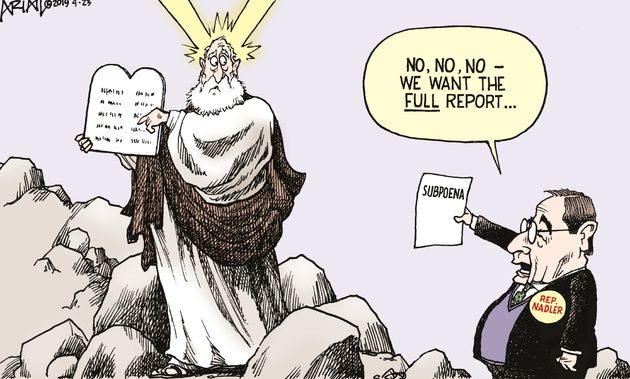 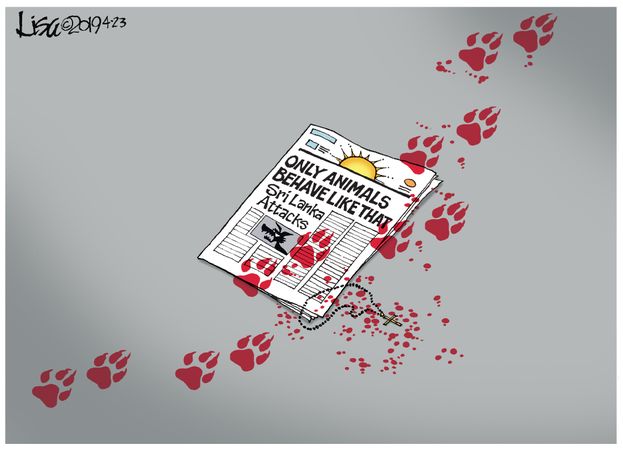 It’s been a long, long day, and John the truck driver really wanted to just get home. Living in Washington D.C, he knew traffic would be bad this time of evening, but to his horror, a traffic jam reared ahead of him larger than anything he could have anticipated.
Bewildered, since he hadn’t heard anything yet on the news, he stuck his head out and just kept seeing cars slowing down and then driving off. Surprisingly, nothing was moving.
Suddenly, a man knocks on the window. John rolls down the window and asks, “What’s going on?”
“Terrorists have kidnapped the entire US Congress!”
“Oh my gosh!” exclaimed John.
“And they’re asking for a $100 million dollar ransom.”
“Jeez Louise!” moaned John.
“Otherwise, they are going to douse them all in gasoline and set them on fire!”
“Lord have mercy!” cried John.
“We are going from car to car, collecting donations.”
“How much is everyone giving, on average?” asked John.
“About a gallon.”
*
*

The Editor:  Would you live in New York City, LL ?

Not A NYC Cat:  I would if I could tear down the NY Times building, and live on the vacant lot.  I would need these dogs to kill the baby eating rats.

Here is an old house.

This is a converted space behind the real house built for something else, almost like a converted barn or shop.

Sandra Bullock is selling her house on the Georgia coast.

These guys built too close to the shore. 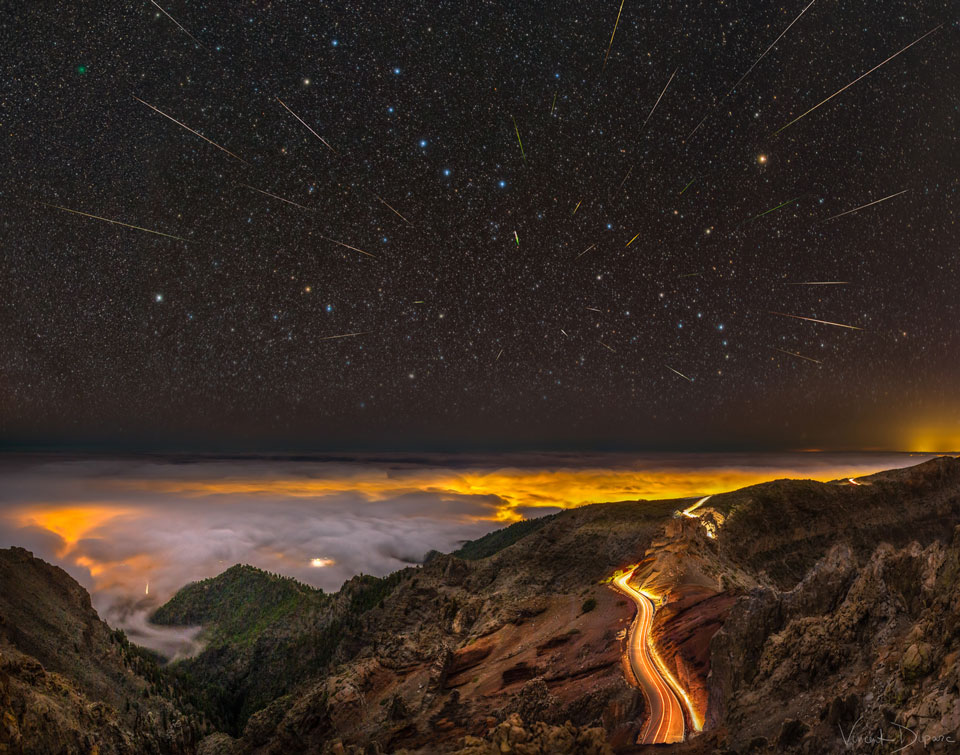 Explanation: Meteor showers are caused by streams of solid particles, dust size and larger, moving as a group through space. In most cases, the orbits of these meteor streams can be identified with dust expelled from a comet. When the Earth passes through a stream, the particles leave brilliant trails through the night sky as they disintegrate in Earth’s atmosphere. The meteor paths are all parallel to each other, but, like train tracks, the effect of perspective causes them to appear to originate from a radiant point in the distance. The featured image composite was taken during January’s Quadrantid meteor shower from La Palma, one of Spain‘s Canary Islands, off the northwest coast of Africa. The Quadrantids radiant is visible just below the handle of the Big Dipper. A careful eye will also discern the faint green coma of Comet Wirtanen. Tonight is the peak of the modest Lyrid meteor shower, with several meteors per hour visible from dark locations with clear skies. 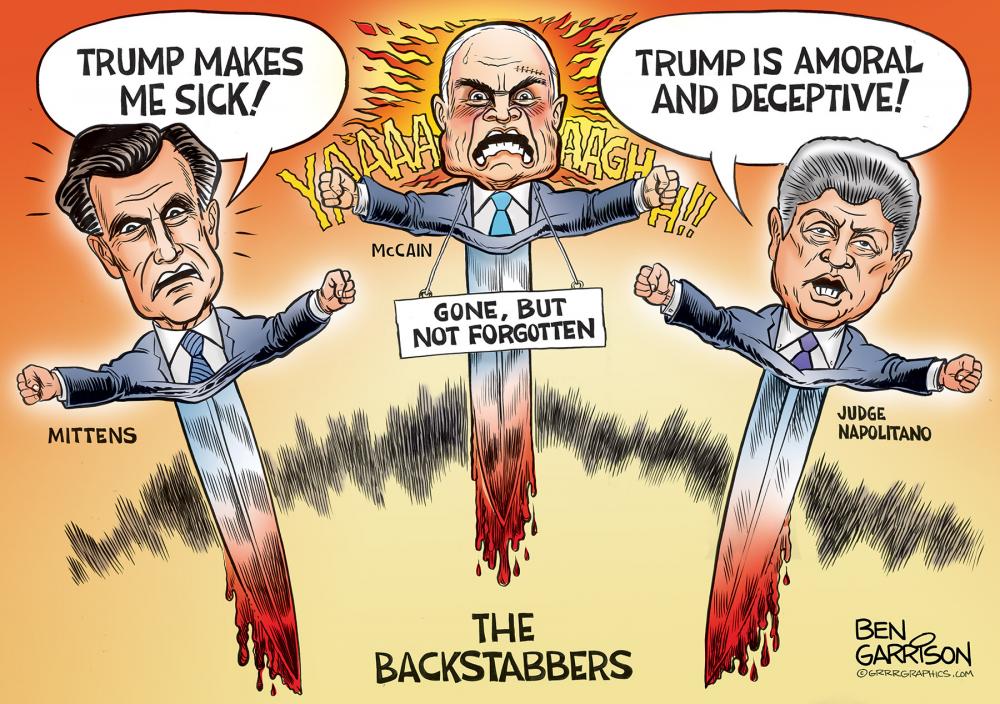 McCain voted no on repealing Obama Care and supported open borders. He was a Deep State puppet, a warmonger and in the pocket of George Soros. Taking his place is Mitt Romney, who regularly condemns president Trump, perhaps out of jealously since he lost his own presidential bid.

What disturbs me the most, however, is Judge Napolitano’s behavior. He once supported Trump and in fact he made waves when he claimed Obama illegally wiretapped Trump and his campaign. That stance got him suspended from Fox News. When he returned, he began to take pot shots at Trump. Now he’s morphed into a ‘Never Trumper.’

Such backstabbing might keep him on the air and in the favor of the Deep State, but for me he’s been Deep Sixed.