What is “community organizing”? Perhaps Matthew Vadum and Jeremy Lott had the best explanation: “What does a “community organizer” do? Good question. Ever since former New York mayor Rudy Giuliani mocked Senator Barack Obama at the Republican convention in September 2008, for the Senator’s community organizing past, and Alaska Governor Sarah Palin said that her previous experience as mayor was “sort of like a community organizer, except that you have actual responsibilities,” Obama’s supports have been furiously spinning this one. They’ve suggested a fanciful interpretation of “community organizer” that includes organizing church picnics and bake sales. Some have even had the cheek to suggest that Jesus Christ was a community organizer. In that spirit, we suggest a better historical precedent: Lenin. Community organizing is leftist, anti-capitalist agitation. It’s about making people angry so they push for change they seek is rarely good. Community organizers are essentially professional political activist who believe that something is terribly wrong with America and that they are the ones we’ve been waiting for to fix it.”

Obama entered the work of community organizing in the spring of 1985, when he took a job with the New York branch of the U.S. Interest research Group (USPRIG), the brainchild of Ralph Nader. According to his PRIG supervisor, Eileen Hershenov, Obama had already developed a solid radical strategies that underlay community organizing – specifically, how the Left used the “community” umbrella to advance its radical agendas. Thus he was comfortable discussing everything from the tactics of Saul Alinsky, the godfather of community organizing to the organizing strategies of socialist groups like the Students for a Democratic Society. As Hershenov would recall, in her discussions with Obama they “were thinking about how you engage the world: what works coming out of the sixties, what structures and models worked and what didn’t.”

The structures and models of the Left that worked, according to those in the organizational universe where Obama now found himself, were strategies of moderation in pursuit of radical goals, working within the “system” in order to undermine it. These were tactics devised by European Marxist such as Andre Gorz, who advocated proposing “non-reformist” reforms. Such reforms were designed to change the very nature of the market system and to take the anti-capitalist struggle to a new level. As Gorz himself put it, these reforms, which he also called “anti-capitalist reforms,” can be “sudden, just as they can be gradual,” but they can all share one common aim: they must be “strong enough to establish, maintain, and expand those tendencies within the capitalist system which serve to weaken capitalism and to shake its joints.” Whatever form the reforms took, in other words, the ultimate goal was to bring capitalism to its knees and to transform the system from within.

Three of Obama’s mentors in Chicago were trained at the Saul Alinsky founded Industrial Areas Foundation (IAF) in the Windy City. Alinsky was known for having helped to establish the aggressive political tactics that characterized the 1960s, and which have remained central to all subsequent revolutionary movements in the United States.

In the Alinsky model, “organizing” is a euphemism for “revolution” – a wholesale revolution whose ultimate objective is the systematic acquisition of power by a purportedly oppressed segment of the population, and the radical transformation of America’s social and economic structure. The goal is to foment enough public discontent, moral confusion, and outright chaos to spark the social upheaval that Marx, Engels, and Lenin predicted – a revolution whose foot soldiers view the status quo as fatally flawed and wholly unworthy of salvation. Thus, the theory goes, the people will settle for nothing less than that the status quo’s complete collapse – to be followed by the erection of an entirely new system upon its ruins. Toward the end, they will be apt to follow the lead of charismatic radical organizers who project an aura of confidence and vision, and who profess to clearly understand what types of social ‘Change” is needed.

But Alinsky’s brand of revolution was not characterized by dramatic, sweeping, overnight transformations of social institutions. As Richard Poe puts it, “Alinsky viewed revolution as slow, patient process. The trick was to penetrate existing institutions such as churches, unions and political parties.” Alinsky advised organizers and their disciples to quietly, subtly gain influence within the decision-making ranks of these institutions, and to introduce changes from that platform.

One of Obama’s early mentors in the Alinsky method, Mike Kruglik, would later say the following about Obama:

“He was a natural, the undisputed master of agitation, who could engage a room full of recruiting targets in a rapid-fire Socratic dialogue, nudging them to admit that they were not living up to their own standards. As with the panhandler, he could be aggressive and confrontational. With probing, sometimes personal questions, he would pinpoint the source of pain in their lives, tearing down their egos just enough before dangling a carrot of hope that they could make things better.” For several years, Obama himself taught workshops on the Alinsky method, which is now working. Numbers of Americans are now against capitalism and calling for socialism.

The Democrats have investigated President Trump for over two years and spent $30 million trying to find any little thing they could use for impeachment. They found nothing! Why in the Hell did they not investigate Obama. The SOB’s objective is to destroy America’s social and economic structure and reduce this country to a third world status. Treason is defined as: The crime of betraying one’s country, especially by attempting to kill the sovereign or overthrow the government. If the Democrats are looking for somebody to impeach, they should not have not looked any further than Barack Hussein Obama!

The constituents of Rep. Hank Johnson’s congressional district erected a statue to him in appreciation of all his hard work while he has been in Congress. It was determined after the statue had been completed that it possessed more intelligence than the Representative.

Patriotism means loving our country, not the government.

The more I listen to the Dems and watch some of the actions they are attempting to make, I guessing that they probably have sources embedded in the IG office or other agencies (the deep state and swamp creatures) telling them that things are looking very bad with the IG report and some of the other ongoing investigations. While there are only a few key Dems that know what is coming, they have signaled to all their members that now is the time to get in front of the news by attacking Trump, Barr, and anyone who works directly for Trump. They are going to need some big time deflections in order to weather the coming storm.

Yesterday I saw a report that has some indications that the FBI spying started as early as 2015 and it involved more than the Trump campaign. They may have also had informants in the other Republican campaigns. If this can be verified, I think a lot more people are looking at serious criminal charges. It seems like the information is now coming out in bits and pieces every day. But there is never any good news and the bad news gets worse and worse for the FBI and the Dems. Mueller better have his life insurance up to date before he testifies because he his going to see some heat seeking missiles coming his way. With Nadler’s actions in recent days, there is no love lost on the Judiciary Committee and I suspect the Republicans will be loaded for bear. It sure looks like Mueller’s efforts were very selective and very focused on Trump and completely ignored the DNC and Clinton. He is going to find the questions very uncomfortable. Maybe I need to check my popcorn supplies before the 15th!!!!! 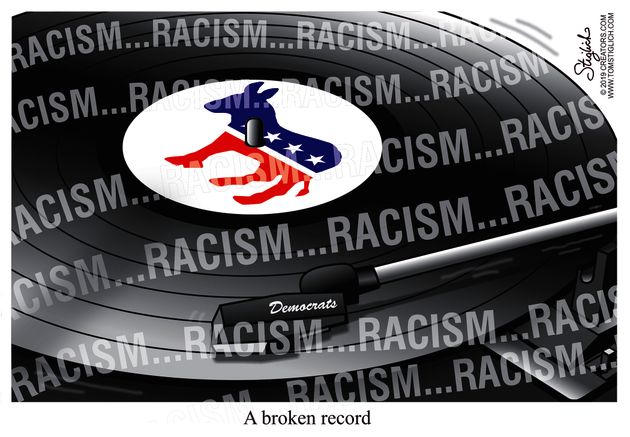 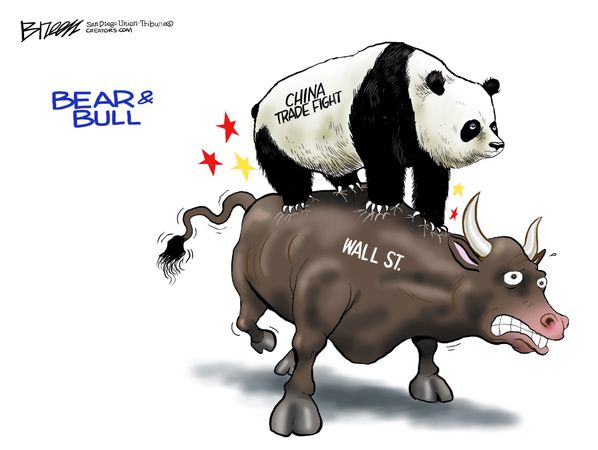 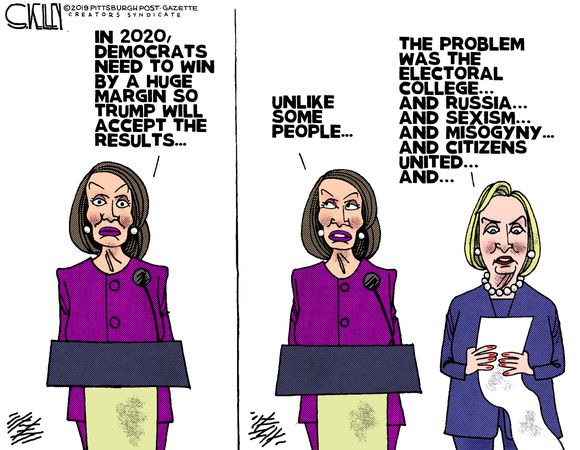 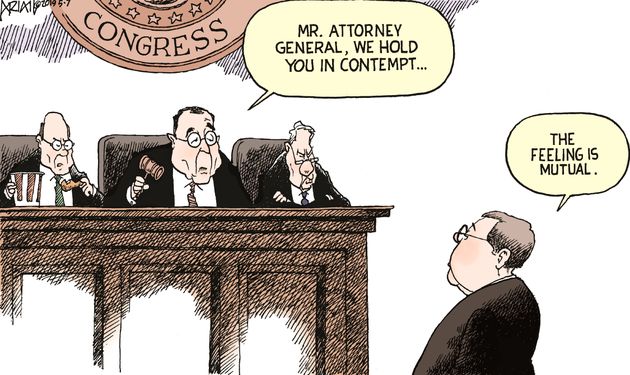 Like Loading...
I want to see them panicking and running around in circles like chickens with their heads cut off. I actually thought that and then I figured it would make a good cartoon. So I drew it. Show them smugly thinking they’re still in control and above the law, but facing justice nonetheless. This is all part of what making America great again means.
* 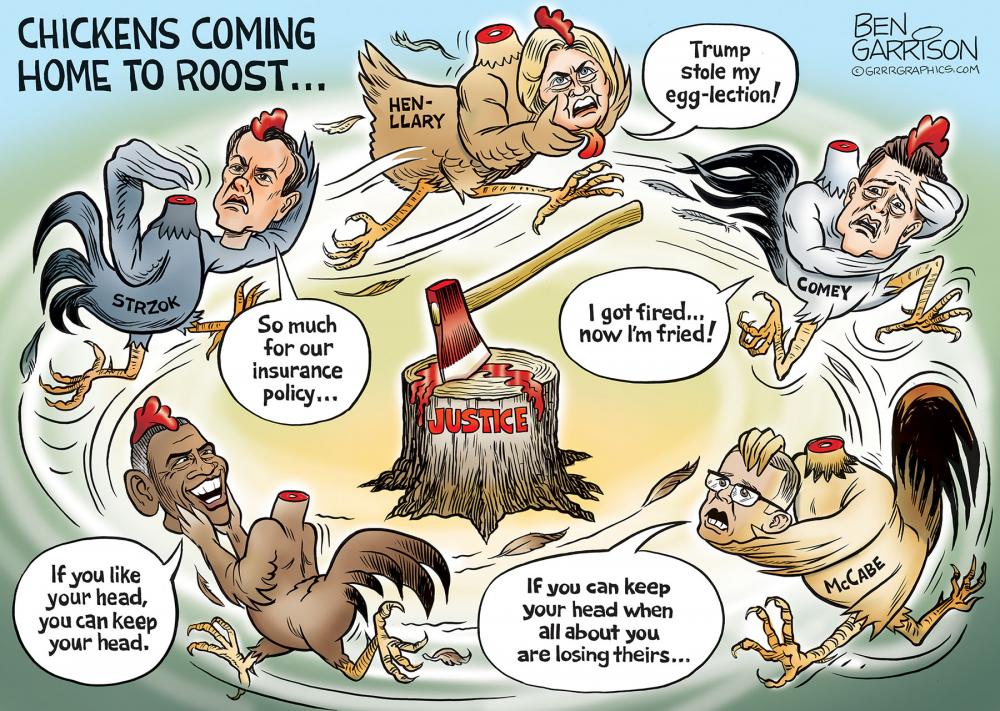 It’s time for the traitors to face justice. Pluck them all! LOCK THEM UP!
-Ben Garrison-
*
*

Impossible Cat:  Burger King is making a big bet on its new menu.

Be careful with the chicken.

Baltimore and Motown have lost the love. 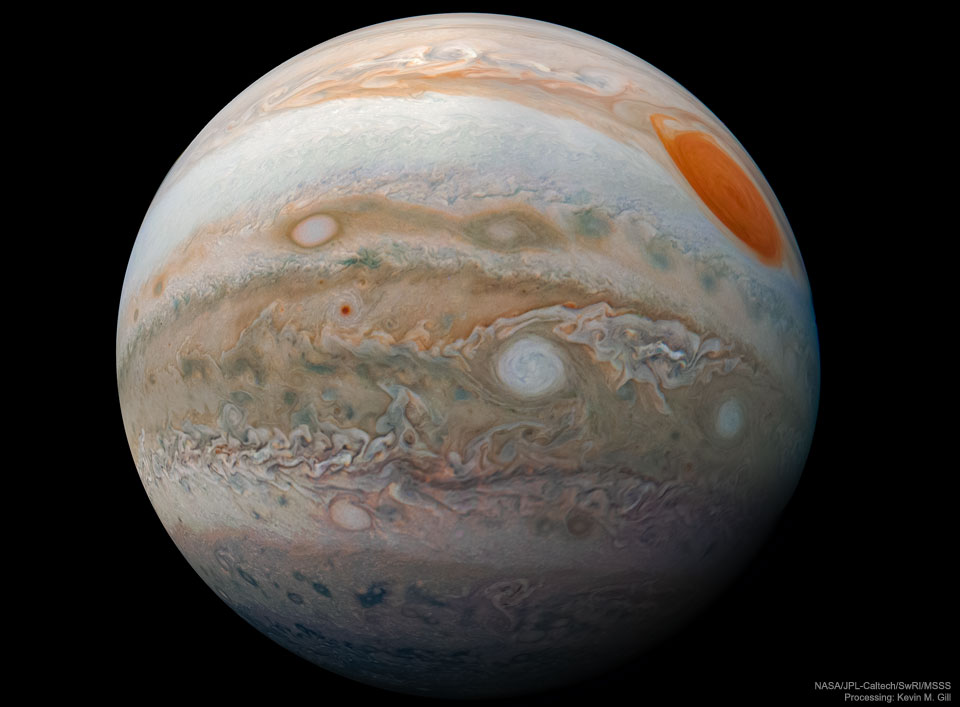 Explanation: What does Jupiter look like up close? Most images of Jupiter are taken from far away, either from Earth or from a great enough distance that nearly half the planet is visible. This shot, though, was composed from images taken relatively close in, where less than half of the planet was visible. From here, Jupiter still appears spherical but perspective distortion now makes it look more like a marble. Visible on Jupiter’s cloud tops are a prominent dark horizontal belt containing a white oval cloud, and a white zone cloud, both of which circle the planet. The Great Red Spot looms on the upper right. The featured image was taken by the robotic Juno spacecraft in February during its 17th close pass of our Solar System’s largest planet. Juno’s mission, now extended into 2021, is to study Jupiter in new ways. Juno’s data has already enabled discoveries that include Jupiter’s magnetic field being surprisingly lumpy, and that some of Jupiter’s cloud systems run about 3,000 kilometers into the planet.