Will Mexico Pay for the Wall?

On Thursday President Trump announced that beginning June 10th the United States will impose a 5% tariff on all (legal) goods coming into our country and the 5% rate will increase another 5% each month until it reaches 25% in October. Mexico can avoid paying these tariffs if they demonstrate a willingness to take aggressive actions to stem the flow of illegals crossing the border between Mexico and the United States.

President Trump could potentially use the money collected from these tariffs to fund the construction of a border wall, and to provide other types of administrative, technical, medical, and legal assistance for the Border Patrol and ICE. Congress has been unwilling to fund these actions in recent months.

It seems that President Trump is the only adult in the room when it comes to immigration. Members of his own party seem to be missing in action when it comes to the topic of immigration. There are still a significant number of RINOs and establishment folks who take their marching orders from the Chamber of Commerce, the K Street lobbyists, the Business Roundtable, and wealthy donors like the Koch brothers. He must also deal with the Democrat Party who simply refuses to acknowledge that there is a crisis at our border. Most of them prefer open borders, they don’t support any new border walls, and many would like to do away with border enforcement and ICE altogether.

In a recent poll, immigration is now the number one issue on the minds of voters, surpassing healthcare. Over the last few months the polls have also shown that citizens are becoming more concerned about the number of illegals coming into this country.

Given that background, I decided to take a look at the actual imports coming into the US from Mexico to estimate the potential fees that might be collected if the tariffs are actually implemented. Here are the actual import numbers for all of 2018 and the first three months of 2019 as reported by the US Census Bureau:

What if Mexico declares that they will impose the same tariffs on US goods going into their country? Well, the US still does pretty well. Looking at the monthly trade deficits we see that the US racked up $22,675.7 billion in deficits for the first three months. If we take 5% of that number it comes to a little over $1.13 billion. If we look at the total trade deficit for all of 2018 of $81,517.4 billion, 5% of that amount would be more than $4.0 billion.

It certainly looks like President Trump may have found a way for Mexico to pay for the wall no matter which set of numbers we use. The naysayers will argue that such actions will disrupt supply chains and long-standing market relationships.

But let us remember that we have other goals in this dispute. The Trump administration clearly wants to bring home more manufacturing jobs. Also, as the US regains control of our southern border it will decrease the number of illegals that American taxpayers are supporting and it will decrease the flow of illegal drugs into our country. The Recovery Village estimates that illegal drugs costs American society $181 billion a year in healthcare costs, lost workplace productivity, law enforcement, and legal costs. Just a 10% improvement in this area would yield over $18 billion a year.

Finally, the raw numbers presented here do not take into account the value of unreported (illegal) flow of funds between the United States and Mexico. It is estimated that 80-90% of all illegal drugs entering the US come from Mexico. There are many estimates as to the value of this activity, but all the estimates are in the billions. Now the Mexican cartels have found a new source of income, that being human trafficking. Recent estimates indicate this business is actually larger and more profitable than the drug trade.

Everyone has an opinion on what needs to happen next. I realize there may be some short-term pain (e.g., higher prices, job disruptions, sourcing decisions) while the proposed tariffs are put into effect. However, I am willing to incur short-term pain if we are able to finally achieve long-term goals of enhanced border security, a substantial reduction in the flow of illegal drugs and human trafficking, and a net reduction in the number of illegal residents in the US.

Mexico has some serious challenges in the days ahead.

The Muslim Brotherhood must understand that their work in America is a kind of grand Jihad in eliminating and destroying the western civilization from within and “sabotaging” its miserable house by their hands and the hands of the believers so that it is eliminated and Allah’s religion is made victorious over all other religions.

Muslim Brotherhood memorandum laying out its goals to dominate America.

With such threats escalating throughout the Western world, it has become readily apparent that we in the West must understand the nature of fundamentalist Islam – both moderate and radical – and its agenda of advancing and implementing Shari’ah Law in Western society. Guarding against the infiltration of fundamentalist Islam is vital to preserving our Republic because Islam’s ultimate goal is to destroy Western society by establishing an Islamic theocracy operating under Shari’ah Law, which would subject all people to the dictates of Allah and Muhammad. It is crucial that, as Americans, we are not deceived, in the name of freedom and reasonable accommodation of religion, to believe that even the basic principles of Shari’ah Law can co-exist with American Law. Moveover, because Shari’ah Law is incompatible with American notions of law and justice, we must ensure that it is barred from receiving recognition in the United States to preserve the liberties and freedoms protected by our Constitution and laws. This is not to say that Muslims cannot live and practice their religion in the United States, for the Free Exercise Clause protects them as it does others. However, they must do so within the system of government established by the Constitution – a system that does not allow for parallel legal systems.

President Trump was investigated for over two years for colluding with Russia to interfere with the 2016 election, at a cost of $30 million, and found to be innocent. Now the Democrats want to impeach him. Barack Obama had a minimum of five members of the Muslim Brotherhood in his administration and gave $150 billion to the Mullahs in Iran, all while they were shouting death to America. Why did the Democrats not investigate Obama and impeach him for giving aid and comfort to the enemy?

The coach had put together the perfect team for the Chicago Bears. The only thing missing was a good quarterback. He scouted and scouted, but couldn’t find a quarterback who could give the Bears a shot at a Super Bowl win.

Then one night, while watching the news, he saw a war-zone scene in the West Bank. In one corner of the background, he spotted a young Israeli soldier with a truly incredible arm. He threw a hand grenade straight into a 15th story window 100 yards away.

He threw another hand grenade 75 yards away, right into a chimney.

Then, he threw another at a passing car going 90 mph.

“I’ve got to get this guy!” the coach said to himself. “He has the perfect arm!”

So, he brings him to the States and teaches him the great game of football. And, the Bears go on to win the Super Bowl.

The young man is hailed as a great hero of football and when the coach asks him what he wants, all the young man wants is to call his mother.

“I don’t think you understand, Mom,” the young man pleads.

“I’ve won the greatest sporting event in the world. I’m here among thousands of my adoring fans.”

“No! Let me tell you!” his mother retorts. “At this very moment, there are gunshots all around us. The neighborhood is a pile of rubble. Your two brothers were beaten within an inch of their lives last week, and I have to keep your sister in the house so she doesn’t get raped!” The old lady pauses, and then tearfully says……”I’ll never forgive you for making us move to Chicago!” 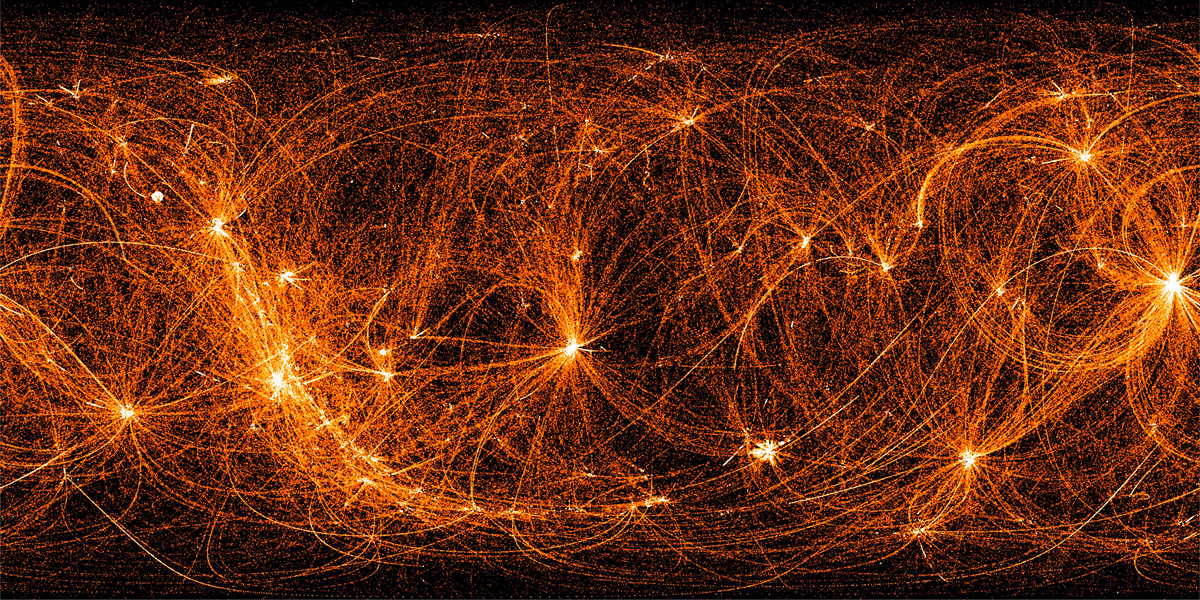 Explanation: A payload on board the International Space Station, the Neutron star Interior Composition Explorer (NICER) twists and turns to track cosmic sources of X-rays as the station orbits planet Earth every 93 minutes. During orbit nighttime, its X-ray detectors remain on. So as NICER slews from target to target bright arcs and loops are traced across this all-sky map made from 22 months of NICER data. The arcs tend to converge on prominent bright spots, pulsars in the X-ray sky that NICER regularly targets and monitors. The pulsars are spinning neutron stars that emit clock-like pulses of X-rays. Their timing is so precise it can be used for navigation, determining spacecraft speed and position. This NICER X-ray, all-sky, map is composed in coordinates with the celestial equator horizontally across the center.

The Editor:  Trump tries one more time to save us.

TE:  How does that hurt anyone, FSC ?

TE:  Are there other problems with no rules/laws being enforced, FSC ?

O Bury Me Not Cat:  Here is a big one.  The Demoworms can talk about respect and dignity all they want, but composting human bodies is not ethical.  Using someone’s remains to grow tomatoes is one step from feeding them to animals.

The average American has also lost the ability to clean-up their own mess.

When the beaches are closed they might get the message.  A good example was the University of Georgia fans leaving trash after tailgating parties.