People often refer to the United States as a democracy, but technically speaking, that’s not true. It’s a republic. Big deal, you say? The Founding Fathers knew their history well, so they knew better than establish the U.S. as a democracy. In a democracy, of course, the majority rules. That’s all well and good for the majority, but what about the minority? Don’t they have rights that deserve respect? Of course they do. Which is why a democracy won’t cut it. As the saying goes, a democracy is two wolves and a sheep voting on what’s for dinner. The Founders were determined to forestall the inherent dangers of what James Madison called “the tyranny of the majority.” So they constructed something more lasting: a republic. Something with checks and balances. A system of government carefully balanced to safeguard the rights of both the majority and the minority.

That led, most notably, to the bicameral structure of our legislative branch. We have A House of Representatives, where the number of members is greater for more populous states, and the Senate, where every state from Rhode Island and Alaska to California and New York have exactly two representatives. Being a republic, we also don’t pick our president through a direct, majority-take-all vote. We have an Electoral College. And the liberals and progressives don’t like that. There attacks on the College are nothing new, but the defeat of Hillary Clinton in 2016 renewed their fury. After all, they never tire of pointing out, Mrs. Clinton captured more of the popular vote than President Trump did. They see the Electoral College as an impediment to their political victories and their progressive agenda, therefore it’s got to go.

“The Electoral College is a very carefully considered structure the Framers of the Constitution set up to balance the competing interests of large and small states,” writes Hans von Spakovsky, a former member of the Federal Election Commission. “It prevents candidates from wining an election by focusing only on high-population urban centers, ignoring smaller states and the more rural areas of the country – the places that progressives and media elites consider flyover country.” Most people who watch the election returns know that a candidate must secure 270 electoral votes to win. That’s because there are 538 votes altogether. As the website for the National Archives notes, “Your state’s entitled allotment of electors equals the number of members in its Congressional delegation: one for each member in the House of Representatives plus two for your Senators.” In short, the Founders were looking out for the people in “flyover country” long before there was airplanes to fly over them.

Were it not for the Electoral College, presidential candidates could act as if many Americans don’t even exist. They could simply campaign in a small handful of states with big populations. Who would care what the people in Iowa think? Or Wyoming? Or any number of other states with smaller populations? The people in flyover country don’t get enough attention as it is, but without the Electoral College they would be completely at the mercy of the majority. What the wolves want matters, but so does what the sheep wants. The Electoral College ensures that no one winds up on the menu.

Flip-flop Joe is at it again. This week he could not make up his mind whether to eliminate Hyde amendment or keep it. The Hyde amendment prevents federal dollars being spent on abortions. He finally made up his mind when Alyssa Milano helped convince him to change his stance on the amendment to eliminate it. This is just what we need in the White House, a president that would have to rely on the Hollywood crowd anytime a decision needs to be made.

Vote for the man who promises the least; he’ll be the least disappointing.

The Editor:  Are you ever afraid, LL ?

Frightful Cat:  Not anymore.  I was fearful of raccoons and opossums at one time, but Amigo cured me.

TE:  How did he do that, with hypnosis or something ?

FC:  No, I would puff up like a Puffer Fish and scream like a cat drowning.  Almost like a Demonazi who sees a Bible or The Constitution.  Amigo would then send the offender to animal Heaven.

Often the fear/confusion is just being unaccustomed to the situation or uninformed.  Here is an example from the olden days.

Thankfully,  the Millennials didn’t live in the sixties. 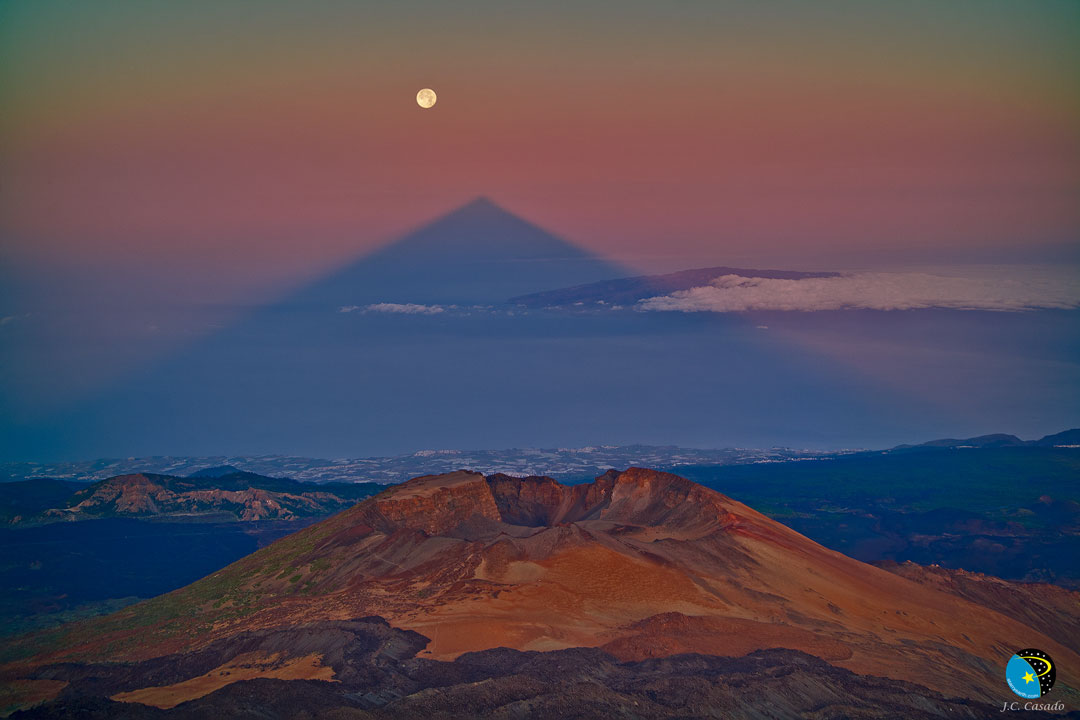 Explanation: Why does the shadow of this volcano look like a triangle? The Mount Teide volcano itself does not have the strictly pyramidal shape that its geometric shadow might suggest. The triangle shadow phenomena is not unique to the Mt. Teide, though, and is commonly seen from the tops of other large mountains and volcanoes. A key reason for the strange dark shape is that the observer is looking down the long corridor of a sunset (or sunrise) shadow that extends to the horizon. Even if the huge volcano were a perfect cube and the resulting shadow were a long rectangular box, that box would appear to taper off at its top as its shadow extended far into the distance, just as parallel train tracks do. The featured spectacular image shows Pico Viejo crater in the foreground, located on Tenerife in the Canary Islands of Spain. The nearly full moon is seen nearby shortly after its total lunar eclipse.