“The rest of the country has no concept what south Texas is going through with the illegals.”

The following three videos are from a Walmart in Texas.

The Editor:   What is noteworthy today, LL ?

Predator Cat:  The first predator is Facebook.  The EU won’t approve this deal, and the Treasury Department shouldn’t either.  I hope Facebook is broken-up by then.

Amazon is safe, the government is giving them big bucks.  You would think that they would include a clause where Bezos’ Washington Post had to report REAL news.

Here is an old standby predator.

One employee is fighting back.

This is a long, well written article on the missing Malaysian airplane.

MILITANT ISLAM IN AMERICA AND ITS DREAMS OF DOMINATION

In the aftermath of the violence on September 11, 2001, American politicians from George W. Bush on down have tripped over themselves to affirm that the majority of Muslims living in the United States are just ordinary people. Here is how President Bush put it during a visit to a mosque on September 17, 2001: “America counts millions of Muslims among our citizens, and Muslims make an incredibly valuable contribution to our country. Muslims are doctors, lawyers, law professors, members of the military, entrepreneurs, shopkeepers, moms and dads.” Two days later he added that “there are millions of good Americans who practice the Muslim faith who love their country as much as I love the country, who salute the flag as strongly as I salute the flag.”

These soothing words, echoed and amplified by many columnists and editorial writers, were obviously appropriate at a moment of high national tension amid reports of mounting bias against Muslims living in the United States. And it is certainly true that the number of militant Islamic operatives with plans to carry out terrorist attacks on the United States is statistically tiny. But the situation is more complex than President Bush would have had it. The Muslim population in this country is not like any other group, for it includes within it a substantial body of people – many times more numerous than the agents of Osama bin Laden – who share with the suicide hijackers a hatred of the United States and the desire, ultimately, to transform it into a nation living under the strictures of militant Islam. Although not responsible for the atrocities on September 11, they harbor designs for this country that warrant urgent and serious attention.

The more readily the message of Islam is available, the more converts it is likely to win. In making headway in the United States, Islam has largely depended on hands-on contact and personal experience. According to one survey, over two-thirds of American converts to Islam were motivated by influence of a Muslim friend or acquaintance. The Autobiography of Malcolm X (1964), with its moving account of redemption through Islam, has had a wide impact on American blacks (and even some whites), causing a substantial number to convert. Similarly not to be discounted are the efforts of the various Muslim organizations in the United States, whose :attempts at educating the American public about Islam” may be responsible, according to one observer, for “Islam increasing numbers.”

But if increasing numbers are necessary, they are also not sufficient. After all, whole countries – Turkey and  Algeria – have overwhelmingly Muslim populations, but Islamism is suppressed by their governments. From the Islamist point of view, indeed, the situation in Turkey is far worse than in the United States, for it is a more grievous thing to reject divine message as interpreted by Islamist than merely to be ignorant of it. Therefore, in addition to building up Muslim numbers, Islamist must prepare the United States for their brand of ideology. This means doing everything possible toward creating an Islamist environment and applying Islamic law. Activities under this heading fall into various categories:

Promoting Islamic rituals and customs in the public square. Islamist want secular authorities to permit students in public institutions, for example, to recite the basmallah (the formula “In the name of God, the Merciful, the Compassionate”) in classroom exercises. They also want the right to broadcast over outdoor loudspeakers the five daily Islamic calls-to-prayer. Similarly, they have agitated for publicly maintained prayer facilities in such institutions as schools and airports.

Privileges for Islam. Islamist seek public financial support for Islamic schools, mosques, and other institutions. They also lobby for special quotas for Muslim immigrants, try to compel corporations to make allowances for Muslim employees, and demand the formal inclusion of Muslim in affirmative-action plans.

Restricting or disallowing what others may do. Islamist want law-enforcement agencies to criminalize activities like drinking and gambling that are offensive to Islam. While seeking wide latitude for themselves, for instance when it comes to expressing disrespect for American national symbols, they would penalize expression of disrespect for religious figures whom Islam deems holy, especially the prophet Muhammad; punish criticism of Islam, Islamism, or Islamist; and close down critical analysis of Islam.

Some of these aims have already been achieved. Others may seem relatively minor in and of themselves, implying no drastic alterations in existing American arrangements but rather only slight adjustments in our already expansive accommodation of social “diversity.” Cumulatively, however, by whittling away at the existing order, they would change the country’s whole way of life – making Islam a major public presence, insuring that both the workplace and the educational system accommodate its dictates and strictures, adapting family customs to its code of conduct, winning it a privileged position in American life, and finally imposing its system of law (Shariah). Steps along the way would include more radical and intrusive actions like prohibiting conversation out of Islam, criminalizing adultery, banning the consumption of pork, formalizing enhanced rights for Muslim at the expense of non-Muslims, and doing away with equality of the sexes.

The Deplorable Infidel (source: The Danger Within: Militant Islam in America, Daniel Pipes)

Alexandria Ocasio-Cortez suggested her comments about concentration camps weren’t outrageous because “concentration camps” were markedly different than the “death camps” that Holocaust victims experienced.        Dachau, the first Nazi concentration camp, opened in 1933, shortly after Adolf Hitler became chancellor of Germany. Located in southern Germany, Dachau initially housed political prisoners; however, it eventually evolved into a death camp where countless thousands of Jews died from malnutrition, disease, and overwork or were executed. This moron knows just about as much American history as Shelia Jackson-Lee, who thinks the Constitution is 400 years old. 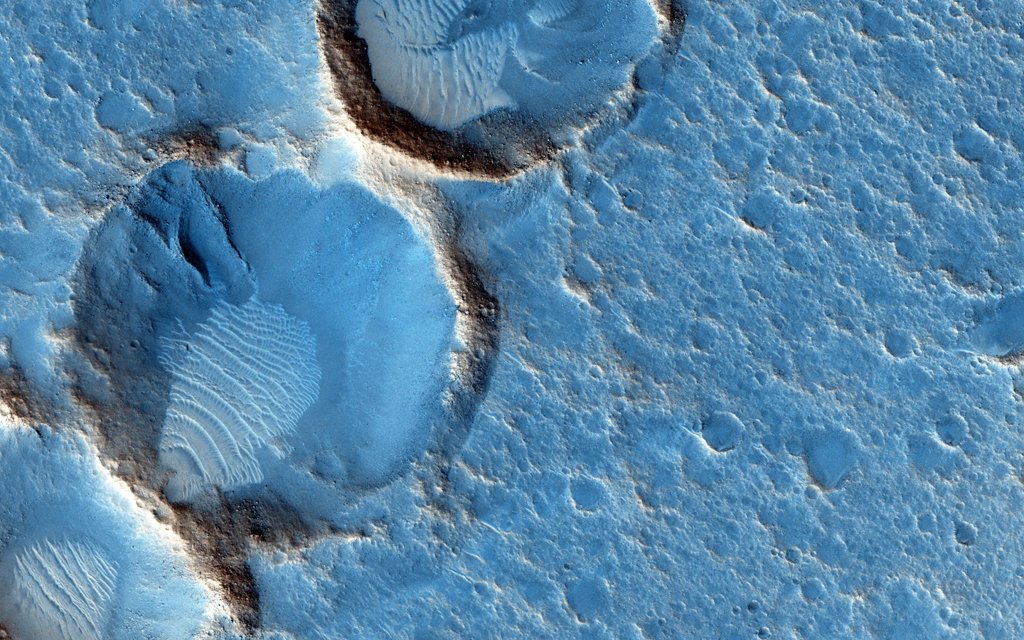 Explanation: This close-up from the Mars Reconnaissance Orbiter’s HiRISE camera shows weathered craters and windblown deposits in southern Acidalia Planitia. A striking shade of blue in standard HiRISE image colors, to the human eye the area would probably look grey or a little reddish. But human eyes have not gazed across this terrain, unless you count the eyes of NASA astronauts in the scifi novel The Martian by Andy Weir. The novel chronicles the adventures of Mark Watney, an astronaut stranded at the fictional Mars mission Ares 3 landing site corresponding to the coordinates of this cropped HiRISE frame. For scale Watney’s 6-meter-diameter habitat at the site would be about 1/10th the diameter of the large crater. Of course, the Ares 3 landing coordinates are only about 800 kilometers north of the (real life) Carl Sagan Memorial Station, the 1997 Pathfinder landing site.