The following was written by Ben Stein and recited by him on CBS Sunday Morning Commentary.

Or maybe I can put it another way: where did the idea come from that we should worship celebrities and we aren’t allowed to worship God as we understand Him?  I guess that’s a sign that I’m getting old, too.  But there are a lot of us who are wondering where these celebrities came from and where the America we knew went to.

In light of the many jokes we send to one another for a laugh, this is a little different: This is not intended to be a joke; it’s not funny, it’s intended to get you thinking.

In light of recent events …  terrorists attacks, school shootings, etc.  I think it started when Madeleine Murray O’Hare (she was murdered, her body found a few years ago) complained she didn’t want prayer in our schools, and we said OK.  Then someone said you better not read the Bible in school.   The Bible says thou shalt not kill; thou shalt not steal, and love your neighbor as yourself.  And we said OK.

Then Dr. Benjamin Spock said we shouldn’t spank our children when they misbehave, because their little personalities would be warped and we might damage their self-esteem (Dr. Spock’s son committed suicide).  We said an expert should know what he’s talking about.  And we said okay.

Now we’re asking ourselves why our children have no conscience, why they don’t know right from wrong, and why it doesn’t bother them to kill strangers, their classmates, and themselves.

Probably, if we think about it long and hard enough, we can figure it out.  I think it has a great deal to do with ‘WE REAP WHAT WE SOW.’

Funny how simple it is for people to trash God and then wonder why the world’s going to hell.  Funny how we believe what the newspapers say, but question what the Bible says.  Funny how you can send ‘jokes’ through e-mail and they spread like wildfire, but when you start sending messages regarding the Lord, people think twice about sharing.  Funny how lewd, crude, vulgar and obscene articles pass freely through cyberspace, but public discussion of God is suppressed in the school and workplace.

Are you laughing yet?

Funny how when you forward this message, you will not send it to many on your address list because you’re not sure what they believe, or what they will think of you for sending it.

Funny how we can be more worried about what other people think of us than what God thinks of us.

If you think this has merit, you may wish to share it.

If not, then just discard it… no one will know you did.  But, if you discard this thought process, don’t sit back and complain about what bad shape the world is in.

My Best Regards, Honestly and respectfully, 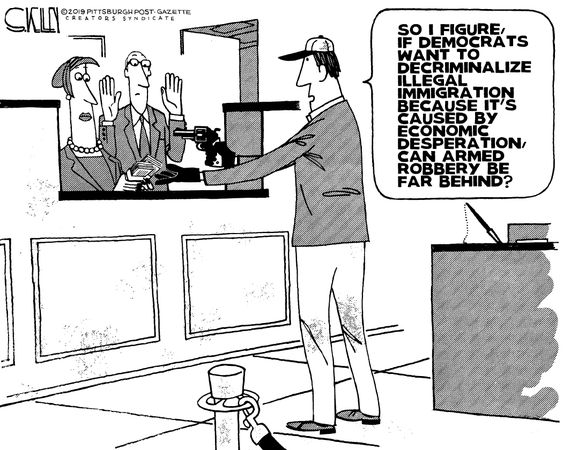 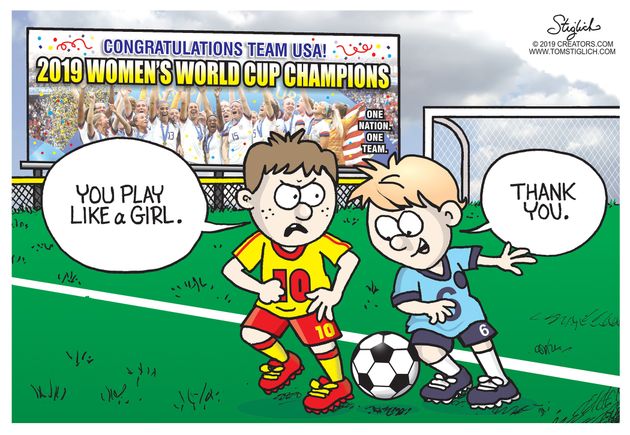 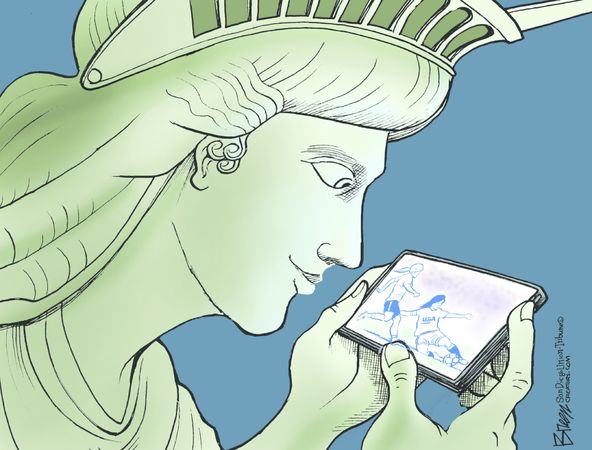 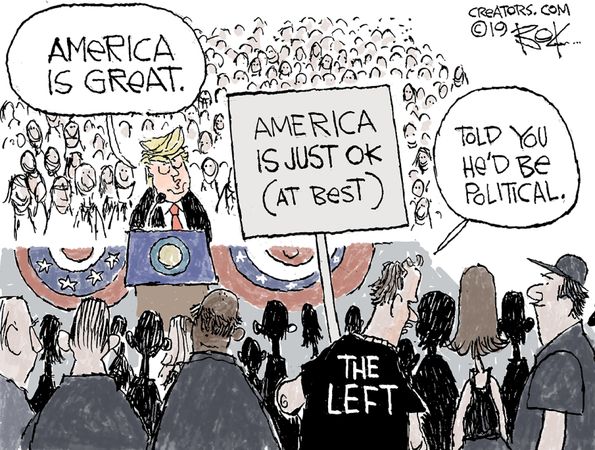 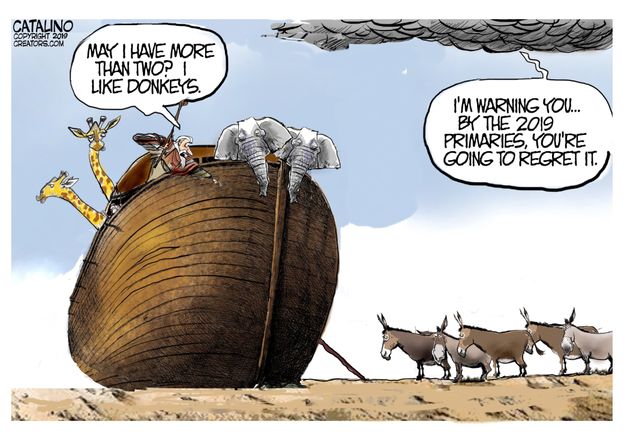 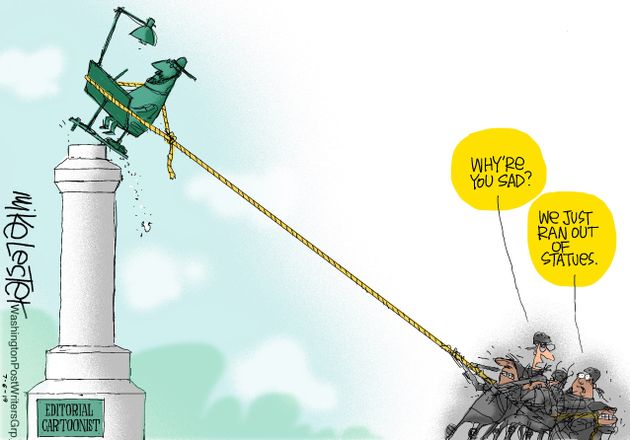 Section 2 of the 14th Amendment provides that if a state denies the franchise to anyone eligible to vote, its allotment of House seats shall be “reduced in the proportion which the number of such… citizens shall bear the whole number of… in each state.” This language is absolute and mandatory. Compliance is impossible without counting how many citizens live in each state. The President should issue an executive order stating that, to comply with the requirements of Section 2 of the 14th Amendment, the citizenship question will be added to the 2020 census. In addition, he can order the Commerce Department to undertake, on an emergency basis, a new Census Act rulemaking. That would trigger another round of litigation. Opponents would choose a federal district court likely to block it again, and the Justice Department would have to seek the Supreme Court’s intervention during its summer recess. While rare, such an emergency review has happened before. With the justification for the citizenship question being clear and compelling, the administration should prevail.

Anything that threatens the integrity of the Census has profound implications. Not only is it the basis for congressional redistricting, it provides the raw data by which government spending is allocated on everything from roads to schools. The Bureau of Labor Statistics also uses the census to prepare the economic data so much of business relies upon. “If the original numbers aren’t as hard as possible, the uses they’re put to get fuzzier and fuzzier,” says Bruce Chapman, who was director of the Census in the 1980s.

Mr. Chapman worries about a revival of the effort led by minority groups after the 2000 Census to adjust the totals for states and cities using statistical sampling and computer models. In 1999, the Supreme Court ruled 5-4 in Department of Commerce v. U.S. House that sampling could not be used to reapportion congressional seats. But it left open the possibility that sampling could be used to redraw political boundaries within the states. What’s also obvious is that knowing the total number of citizens, as opposed to legal or illegal aliens, is useful information. Inquiring about citizenship status when you’re counting people is hardly intrusive or an abuse, let alone illegal, as previous court challenges to various questions have reaffirmed.

Holding a copy of the U.S. Constitution up to an American hating moron Democrat is like holding a cross up to a vampire.

The Second Amendment is the Equal Rights Amendment.

The Red Covered Bridge (World Guide Number 13-06-01) is one of only eight historic covered bridges remaining in Illinois. It was built in 1863 spanning Big Bureau Creek on County Rd. 1950 E, north of Princeton in Bureau County. It is 93 feet long and utilizes Howe trusses.

Born in the 1930s and early 40s, we exist as a very special age cohort. We are the Silent Generation.

We’re the smallest number of children born since the early 1900s. We are the “last ones.”

We’re the last generation, climbing out of the depression, who can remember the winds of war and the impact of a world at war which rattled the structure of our daily lives for years.

We’re the last to remember ration books for everything from gas to sugar to shoes to stoves.

We saved tin foil and poured fat into tin cans.

We saw cars up on blocks because tires weren’t available.

We can remember milk being delivered to our house early in the morning and placed in the milk box on the porch.

We are the last to see the gold stars in the front windows of our grieving neighbors whose sons died in the War.

We saw the ‘boys’ come home from the war, and build their little houses.

We’re the last generation who spent much of our childhood without TV; instead, we imagined what we heard on the radio.

As we all like to brag, with no TV, we spent our childhood “playing outside”

We played outside, and we played on our own.

There was no little league.

There were no city playground for kids.

The lack of television in our early years meant, for most of us, that we had little real understanding of what the world was like.

On Saturday afternoons, the movies, gave us newsreels of the war sandwiched in between westerns and cartoons.

Telephones were one to a house, often sharing party lines.

Computers were called calculators, they only added and were hand cranked; typewriters were driven by pounding fingers, throwing the carriage, and changing the ribbon.

The internet and GOOGLE were words that didn’t exist.

Newspapers and magazines were written for adults and the news was broadcast on our table radio in the evening by Gabriel Heatter.

We’re the last group who had to find out for ourselves.

As we grew up, the country was exploding with growth.

The G.I. Bill gave returning vets the means to get an education and spurred college growth.

The veterans joined civic clubs and became active in politics.

The radio networks expanded from 3 stations to thousands of stations

Our parents were suddenly free from the confines of the depression and the war, and they threw themselves into exploring opportunities they had never imagined.

We weren’t neglected, but we weren’t today’s all-consuming family focus.

They were glad we played by ourselves until the street lights came on.

We entered a world of overflowing plenty and opportunity; a world where we were welcomed.

We enjoyed a luxury; we felt secure in our future.

Polio was still a crippler.

The Korean War was a dark presage in the early 50s and by mid-decade school children were ducking under desks for Air-Raid training.

Castro set up camp in Cuba and Khrushchev came to power.

We are the last generation to experience an interlude when there were no threats to our homeland.

We came of age in the 40s and 50s. The war was over and the cold war, terrorism, global warming, and
perpetual economic insecurity had yet to haunt life with unease.

Only our generation can remember both a time of great war, and a time when our world was secure and full of bright promise and plenty We lived through both.

We grew up at the best possible time, a time when the world was getting better, not worse.

Yes, We are the Silent Generation!

More than 99% of us are either retired or deceased, and we feel privileged to have “lived in the best of times”!