Liberty is seldom lost in one fell swoop. It is eroded away over time. Then, one day, a nation that was once free finds itself in bondage.

In the 230 years since the ratification of the U.S. Constitution, America has moved toward a fascist totalitarianism in fits and starts.

It is called gradualism. I have written before about how gradualism reduces the shock potential and numbs the senses to the reality that is transpiring all around.

Consider the actions of the 28th President of the United States, Woodrow Wilson. With the help of a Democrat-controlled Congress, Wilson established the Federal Reserve in 1913 and instituted an income tax which necessitated the establishment of the Bureau of Internal Revenue — the precursor to the Internal Revenue Service (IRS).

These agencies began the stealth system of “legal” theft from the American people and put us on a fiat paper money dollar system. This means that all who earn dollars and save dollars have depreciating currency with depreciating assets. The IRS is nothing more than a blunt instrument used to beat Americans into compliance with a socialist, redistributionist, fascist government that passes itself off as a democracy. It gives a face of “legitimacy” to the government’s theft of our labor.

This theft has spread far and wide in our society, as has statism and socialism. Despite the wishes of many on the right that we “stop” communists like Bernie Sanders and the “democratic socialists” (communists) like Alexandra Ocasio-Cortez, they can’t be stopped because they are a product of our current socialist society.

If you don’t believe that we live in a country where the state already owns and controls nearly everything, take a moment right now, and look around you at everything you “own.”

I “own” my car (unless I want to change the software, then they brick the electronics in it).

I “own” my house (except for 30 years of payments, and only if I pay my ‘property taxes,’ whereupon if I do not, the government takes my house to ‘pay’ itself).

I “own” my phone (unless Apple decides I have used something incorrectly, then they deactivate or lock me out of it).

I “own” my tractor (until I want to fix it, and then I must use company software or it gets idled).

I “own” my gun (until Red Flag laws allow anyone who doesn’t like that I own one, or doesn’t like me, or for any reason, can call the police and they will come and take them).

The administration of Barack Obama surprisingly released the details of an executive order (National Defense Resource Preparedness) that could be used to officially confiscate everything and anything else as well. The order calls for government acquisition of resources and the ability of the government to “foster cooperation between the defense and commercial sectors for research and development and for acquisition of materials, services, components, and equipment to enhance industrial base efficiency and responsiveness” if it is deemed vital to national security interests.

My friend, gradualism keeps the crowd asleep. As some are jolted along the way to find themselves impoverished — too late to recover… their good life is gone and their pomp and circumstance now as silent as a funeral march. They were just too busy with bread and circus to notice their freedom was slipping away like sand through the fingertips.

The fact is, being aware is difficult. The more things remain the same, the more they change — and it’s difficult to see what’s changing. Here again, it is stealth and gradualism that is imperceptible to most people. There are no really great shocking occasions when tens, hundreds, or thousands will join in protest. The only time it happens is when people are incited by the minions of activists like George Soros.

If what is happening right now had happened in the 50s, it would have put people into shock. But it has happened over a long period of time. There have been hundreds of little steps, most of them imperceptible, each of them preparing you not to be shocked by the next. Suddenly the world you live in, your nation, your town, is not the world you were born in at all.

The forms are still there, all untouched, all reassuring; the houses, the shops, the jobs, the mealtimes, the visits, the concerts, the cinema, the holidays. But the spirit of them — which you never notice, because you’ve been steered toward the life-long mistake of identifying it with the forms — has changed. It is all bread and circus.

We still hear the politicians and bureaucrats screaming “democracy” and “the Constitution,” which has finally begun to sicken those who know the truth: That we have come under totalitarian and fascist domination. We have failed in taking responsibility for our own survival and the future of our children. Will anyone deliver us now from this nightmare? Will we deliver ourselves?

Yours for the truth,

P.S. — President Donald Trump has shaken up the status quo. Everything is different, from politics to the economy. If we are to prosper in this age of Trump, we must change, too. Building wealth with a minimum-wage or middle-class income is now easier than ever. 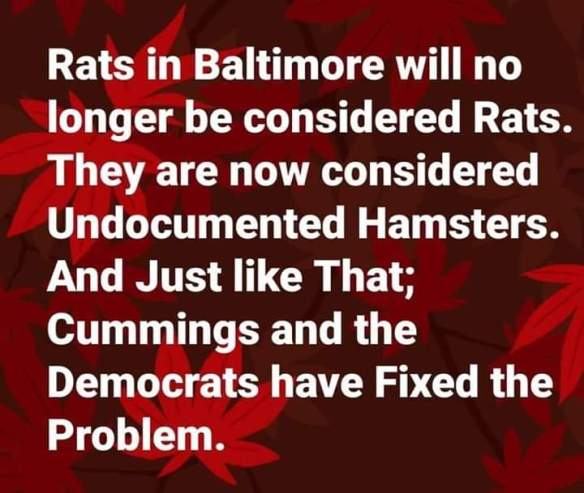 The Editor:  Who are the portraits of, LL ?

Da Vinci Puzzle Cat:  I’m not sure, but they are interesting.  Ole Bill is even creepier on canvas.

Speaking of bizarre Senator Bernie talked politics with Cardi B.  Surely, he will surge back into the lead for his party’s presidential nomination.

Here is her initial interview as a true Democrat.

This is why elections should be on paper.  You can throw them away, but otherwise they are secure.  It’s simple, safe,  secure, and the least costly—no muss, no fuss.

These are some Democrats that the news ignores.

HISTORY OF THE SHRINERS

Ever wonder why the Shriners have an Arabian theme, their temples have Arabian names, and why they all wear a fez, which, by the way, is named after the city of Fez, Morocco?

In 1870 there were several thousand Freemasons in Manhattan, many of whom lunched at the Knickerbocker Cottage at a special table on the second floor. There, the idea of a new fraternity for Masons, stressing fun and fellowship, was discussed. Walter M. Fleming, M.D., and William J. Florence took the idea seriously enough to act upon it. Florence, a world-renowned actor, while on tour in Marseille, was invited to a party given by an Arab diplomat. The entertainment was something in the nature of an elaborately staged musical comedy. At its conclusion, the guests became members of a secret society. Florence took copious notes and drawings at his initial viewing on two other occasions, once in Algiers and once in Cairo. When he returned to New York in 1870, he showed his material to Fleming. Fleming created the ritual, emblem and costumes. Florence and Fleming were initiated August 13, 1870, and they initiated 11 other men on June 16, 1871.

In1875, there were only 43 Shriners in the organization. In an effort to encourage membership, at the June 6, 1876 meeting of Mecca Temple, the Imperial Grand Council of the Ancient Order of the Nobles of the Mystic Shrine for North America was created. Fleming was elected the first Imperial Potentate. After some other reworking, by 1878 there were 425 members in 13 temples in eight states, and by 1888, there were 7,210 members in 48 temples in the United States and Canada. By the Imperial Session held in Washington, D.C. in 1900, there were 55,000 members and 82 Temples.

The Shriner’s charitable arm is the Shriners Hospitals for Children, a network of Twenty-two hospitals in the United States, Mexico, and Canada. In June 1920, the Imperial Council Session voted to establish a “Shriners Hospital for Crippled Children,” The purpose of this hospital was to treat orthopedic injuries and conditions, diseases, burns, spinal cord injuries, and birth defects, such as cleft lip and palate, in children.

This past week, the PGA Tour was at the Medinah Country Club just outside of Chicago. The club is named after Medinah, Saudi Arabia. It was founded in !924 by the Medinah Shriners. Carved out of 640 acres of farmland in the early 1920s, Medinah was designed to be a country retreat for the Shriners – a fun-loving branch of the Masons best known for their charitable work, red fezzes and parade units .When it opened, only Shriners were allowed to become members, even though the organization never owned the club. The centerpiece is the massive clubhouse largely inspired by Byzantine-style temples. A sand trap on one of Medinah’s three courses is shaped like a two-humped camel, and when you drive out of Medinah, a sign in green, Arabic-style lettering says: “Allah Be With You.”

There have been three U.S. Opens, two PGA Championships, one U.S. Senior Open, and a Ryder Cup held at Medinah’s Course No. 3.

We all know the protocol by now:

A lie can travel halfway around the world while the truth is putting on its boots, but at least modern technology gives the truth a decent pair of sneakers.