Returning home from work, a blonde was shocked to find her house ransacked and burglarized. She telephoned the police at once and reported the crime. The police dispatcher broadcast the call on the radio, and a K-9 unit, patrolling nearby, was the first to respond.

As the K-9 officer approached the house with his dog on a leash, the blonde ran out on the porch, shuddered at the sight of the cop and his dog, then sat down on the steps.

Putting her face in her hands, she moaned, ‘I come home to find all my possessions stolen. I call the police for help, and what do they do?

They send me a Blind policeman!’ 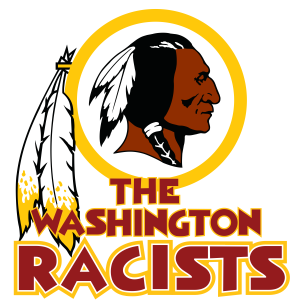 No matter which side you are on in the matter of renaming the Washington Redskins, this is funny. This guy is hilarious…

Dear Mr. Page: I agree with our Native American population. I am highly jilted by the racially charged name of the Washington Redskins. One might argue that to name a professional football team after Native Americans would exalt them as fine warriors, but nay, nay. We must be careful not to offend, and in the spirit of political correctness and courtesy, we must move forward.

Let’s ditch the Kansas City Chiefs, the Atlanta Braves and the Cleveland Indians. If your shorts are in a wad because of the reference the name Redskins makes to skin color, then we need to get rid of the Cleveland Browns.

The Carolina Panthers obviously were named to keep the memory of militant Blacks from the 60’s alive. Gone. It’s offensive to us white folk. The New York Yankees offend the Southern population. Do you see a team named for the Confederacy? No! There is no room for any reference to that tragic war that cost this country so many young men’s lives. I am also offended by the blatant references to the Catholic religion among our sports team names. Totally inappropriate to have the New Orleans Saints, the Los Angeles Angels or the San Diego Padres.

Then there are the team names that glorify criminals who raped and pillaged. We are talking about the horrible Oakland Raiders, the Minnesota Vikings, the Tampa Bay Buccaneers and the Pittsburgh Pirates!

Now, let us address those teams that clearly send the wrong message to our children. The San Diego Chargers promote irresponsible fighting or even spending habits. The New York Giants and the San Francisco Giants promote obesity, a growing childhood epidemic.  The Cincinnati Reds promote downers/barbiturates. The Milwaukee Brewers. Well that goes without saying.

So, there you go. We need to support any legislation that comes out to rectify this travesty, because the government will likely become involved with this issue, as they should. Just the kind of thing the do-nothing Congress loves.

As a diehard Oregon State fan, my wife and I, with all of this in mind, suggest it might also make some sense to change the name of the Oregon State women’s athletic teams to something other than “the Beavers (especially when they play Southern California. Do we really want the Trojans sticking it to the Beavers???

I always love your articles and I generally agree with them. As for the Redskins name I would suggest they change the name to the “Foreskins” to better represent their community, paying tribute to the dick heads in Washington DC.

Where is the news media ?

The Editor:  Is it true than Obama had a scandal free administration, LL ?

It’s True Cat:  He sure did, except for all the disasters we have covered previously.  Here is one that keeps being spread by the Democrat losers and news media.   The Michael Brown shooting.  It was even cleared by Obama’s corrupt Attorney General and DOJ.

This was sent in by a loyal reader.

I almost forgot this.

The Georgia Governor wants to resign and run for Vice President.   She sure would be an asset to anyplace other than Georgia, U.S.A.   They have bumper stickers already printed that read,  ”  The IQ of both places went up when she moved to DC “.

The Demostinkyslimesewerrats are ignorant of the Constitution.  The voters should make the candidates read and explain the Bill of Rights at town meetings.

“Our government is now taking so steady a course as to show by what road it will pass to destruction, to wit, by consolidation first, and then corruption, it’s necessary consequence. The engine of consolidation will be the federal judiciary; the two other branches the corrupting and corrupted instruments.”

“We already see the power, installed for life, responsible to no authority (for impeachment is not even a scarecrow), and advancing with a noiseless and steady pace to the great object of consolidation. The foundations are already deeply laid by their decisions for the annihilation of constitutional state rights, and the removal of every check, every counterpoise to the engulfing power of which themselves are to make a sovereign part. If ever this vast country is brought under a single government, it will be one of the most extensive corruption, indifferent and incapable of a wholesome care over so wide a spread of surface. This will not be borne, and you will have to choose between reformation and revolution. If I know the spirit of this country, the one or the other is inevitable. Before the canker is become inveterate, before its venom has reached so much of the body politic as to get beyond control, remedy should be applied.”

“There is no danger I apprehend so much as the consolidation of our government by the noiseless, and therefore un-alarming instrumentality of the Supreme Court. This is the form in which Federalism now arrays itself, and consolidation is the present principle of distinction between Republicans and the pseudo-Republicans but the real Federalists.”

Thomas Jefferson, a stanch advocate of decentralized power, recognized that a federal government empowered to judge the extent of its own authority was one that would never remain limited in size or scope. Because of this, the power of the federal judiciary was always of great concern to him.

Ted Wheeler, mayor of Portland, Oregon, says all demonstrations are peaceful as long as no one is killed.

Donald Trump, the white supremacist, is living in the White House. How long will it be before some far-left nut demands the color, of the residence of the President, can no longer be white? Folks, that time is coming. You cannot have anything white. It’s racist.

There is no worse tyranny than to force a man to pay for what he does not want merely because you think it would be good for him.