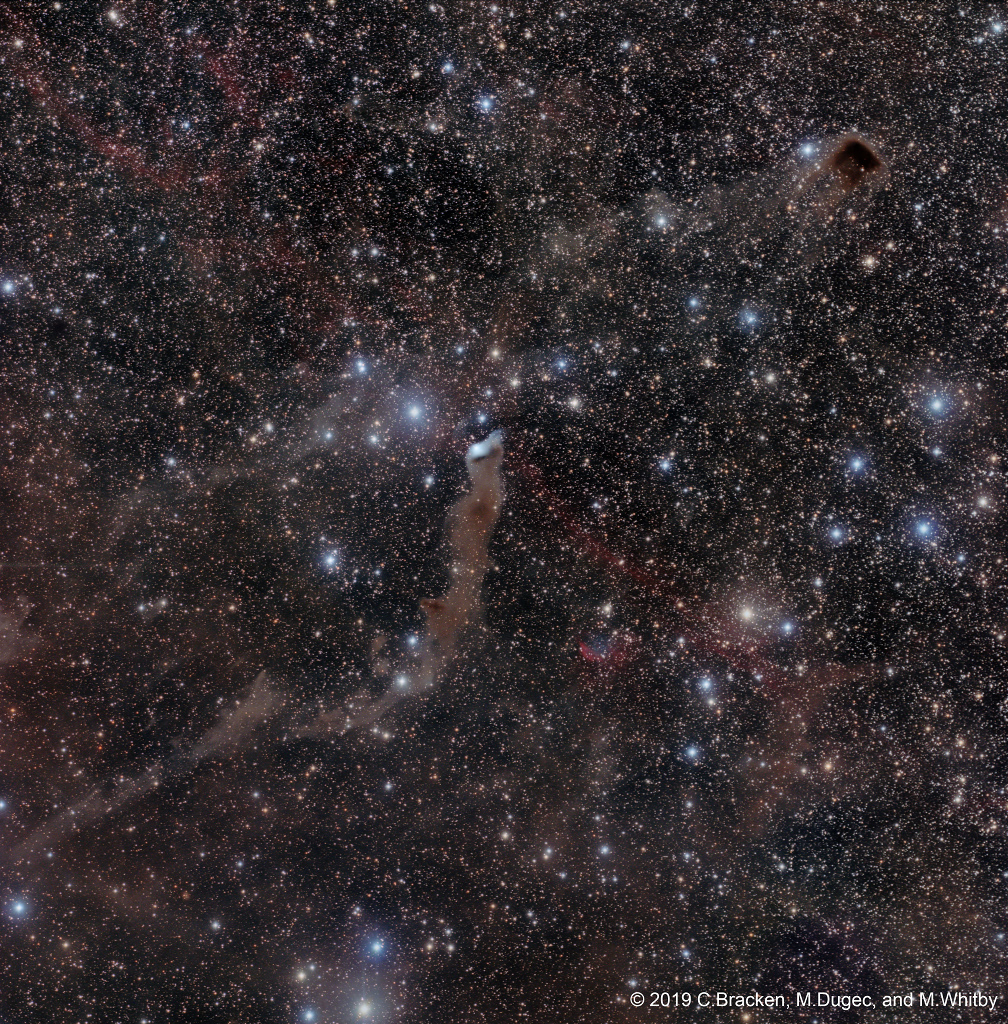 Explanation: The mysterious blue reflection nebula found in catalogs as VdB 152 or Ced 201 really is very faint. It lies at the tip of the long dark nebula Barnard 175 in a dusty complex that has also been called Wolf’s Cave. At the center of this deep and widefield telescopic view, the cosmic apparitions are nearly 1,400 light-years away along the northern Milky Way in the royal constellation Cepheus. Near the edge of a large molecular cloud, pockets of interstellar dust in the region block light from background stars or scatter light from the embedded bright star giving the the nebula its characteristic blue color. Ultraviolet light from the star is also thought to cause a dim reddish luminescence in the nebular dust. Though stars do form in molecular clouds, this star seems to have only accidentally wandered into the area, as its measured velocity through space is very different from the cloud’s velocity. Another dense, obscuring dark nebula, LDN 1221, is easy to spot at the upper right in the frame, while the more colorful planetary nebula Dengel-Hartl 5 is just below center. Faint reddish emission from an ancient supernova remnant can also be traced (lower right to upper left) against the dust-rich complex in Cepheus.

Jin Cat:   Magic is mostly a lost ability that man had before being kicked out of Eden.  Occasionally a person is born with Magical powers.

One magical power is the ability to disappear.  Our older loyal viewers will remember the old TV show Bonanza.  As soon as any of the Cartwrights got serious about a woman she disappeared.  100 % of the time.  The same magic continues with the Epstein mysterious death.  The first important next witness has disappeared.

It’s not Epstein that they are worried about, but anyone who can verify the accusations against Bill Clinton and Prince Andrew to name two ( 2 ).  The hidden movers and shakers.

Ghislaine Maxwell was last seen on 8-15-2019.  She will probably be like a Cartwright fiance.  She has her own Little Black Book.

If I was the pilot of the Lolita Express ( the party plane ) I would find an undisclosed location.  Bill Clinton flew on it twenty-six ( 26 ) times.

Like magic, eleven ( 11 ) losers have disappeared from the televised Demosmellyslimystinkyrepulsive debates.    That leaves a bunch more to give us some free stuff.

This is real magic.  Two people with no appreciable skills earn multi millions for favors done and decisions made favoring various businesses while in office.  Barry’s skills were community organizing and Michelle’s were growing carrots which were tended by her servants.   This is the job that Barry is qualified for.

Magic Mushrooms are being studied.  The 1960’s are beginning to look peaceful.

Two elderly, excited Southern women were sitting together in the front pew of the church listening to a fiery preacher. When this preacher condemned the sin of stealing, these two ladies cried out, “Amen, Brother!”

When the preacher condemned the sin of lust, they yelled again, “You preach it, Reverend!”

And when the preacher condemned the sin of lying, they jumped to their feet and hollered, “RIGHT ON! TELL IT LIKE IT IS! AMEN!”

But when the preacher condemned the sin of gossip, the two got very quiet. One turned to the other and said, “He’s quit preaching and now he’s just meddling.”

A tourist was being led through the swamps of Florida.

“Is it true,” the tourist asked, “that an alligator won’t attack you if you carry a flashlight?”

“That depends,” replied the guide, “on how fast you carry the flashlight.”

Discovered in 1928, Penicillin was one of the world’s first antibiotics, but the man who discovered it—Dr. Alexander Fleming—never actually meant to “revolutionize all medicine,” as he later described it. Rather, Fleming came across the antibiotic entirely by chance when he left out cultures of Staphylococcus aureus in his lab for two weeks and returned to find that their growth had been prevented by a mold called Penicillium notatum.

Two covered spans, 99′ and 100′. One uncovered 15′ 4″ span. The 1936 Alabama DOT covered bridge inventory lists the length as 214′ 4″. The original Horton Mill Covered Bridge was built in 1894 at the foot of Sand Mountain, about ¾ mile downstream from the current bridge. It was named for a local business owned by Thurman M. Horton, who helped construct the first bridge. This bridge provided residents of Sand Mountain with better access to nearby Oneonta as well as to Horton’s mill and general store which were located along the east side of the Calvert Prong. Construction of the current Horton Mill Covered Bridge began in 1934 over a deep gorge cut by the river, led by Talmedge Horton, a descendent of Thurman Horton. It took a 15-man crew 1½ years to complete the project. This crew included Zelmer C. Tidwell and his uncle, Forrest Tidwell, who helped in building three other prominent covered bridges in Blount County (Easley, Nectar, Swann). The bridge was fully restored in 1974 by the Alabama Historical Commission and the Blount County Commission. The Horton Mill Covered Bridge was reported closed to motor vehicle traffic on September 27, 2007 due to unsafe conditions. It was reopened on March 11, 2013. The bridge was listed on the National Register of Historic Places on December 29, 1970, the first covered bridge in the southeastern United States to be added. At 70 feet, it is the highest covered bridge above any U.S. waterway.

At the bar, Tom and Bill were talking. “My uncle tried to make a new kind of car. He took the wheels from a Cadillac, the radiator from a Lexus, and tires from a Ford,” said Tom.

“What did he get?” asked Bill.