A WORD: FROM THE WISE

I just heard that Joe Biden only has $9 million in funds available, which is even below Horizontal Harris. It looks like his days are numbered in the race but we need to keep him in the primary hunt until Christmas. The various states have cut-off dates when candidates can enter the presidential campaign. The first state closes its window in early November and then a bunch start closing in December. Once that happens, people like Clinton, Michelle Obama, and Bloomberg would no longer be able to have their names on the November 2020 ballot. The guy that worries me (mainly because he has the money) is Bloomberg. But he has said that he will not get into the race as long as Biden is running. That is something to watch in the coming days. Biden has been relying on large donors to fund his campaign but apparently that well is running dry. Maybe Hunter Biden could chip in some of the hard-earned cash from China and Ukraine!

The reason that AOC has decided to back Sanders in the presidential race has little to do with her support for him and much to do about securing his base after the election. It seems that she is thinking about running for President!!!! She is the most popular figure in their party right now and she is trying to put together a base of supporters for the next few years. Can you see this country being run by AOC? I think the first thing to happen would be a crash in the stock market. I do not think she would ever be able to recover from that event, but just think how our military would fare under her leadership. We might actually see the first military coup in this country if things went south from her first days in office. Think about the people she would select to head cabinet posts!

I am beginning to worry about a lot of Republicans. The Senate is scheduled to have a vote to override Trump’s veto on funding for the wall. 11 Republicans voted for this legislation. I guess they still don’t understand that Trump was elected to shake up things in Washington. Then we have Senator Graham – the neo con who never saw a war that he did not like. I think Trump has laid down the marker on these endless, never win wars that both parties seem to like but never vote to end. Just think it only took the Kurds one day to change alliance from the US to Russia/Syria. The Middle East will be fighting each other for the next 100 years or until one of them sets off a nuke to wipe out the entire region. And while I highlighted Graham, he has had 9 months as the head on the Judicial Committee to investigate the origins of the Russia hoax and he is still talking about getting ready to do it. All talk and no action is exactly the game plan for the establishment. He says he wants to get to the bottom of it but we will be at 2024 before he decides to lift a finger or call a witness. Shameful! And I am all in favor of Russia spending some military assets to protect this worthless section of earth. Russia cannot afford to spend this money with oil prices where they are now. The alliances in the Middle East shift faster than the sand dunes. Secure our borders to keep ISIS out and it will cost a whole lot fewer dollars and American lives.

If the Dems get routed in the 2020 elections, it is going to be interesting to see who takes the fall for the wipe out. My guess is Pelosi will enter the witness protection program sponsored by the FBI and Wray. Will AOC throw her name into the ring to be Minority Leader (assuming she is re-elected to her seat). Adam Shifty Schiff may face censure at best and expelled at worst. Nadler is going to face a far left primary challenger and may not make it to the elections. Those 40 or so Dems that won in districts that Trump won in 2016 may be one and done with their political careers. The one unknown right now is how many Dems are going to be caught up in the Barr/Durham investigations. It looks like much of that work is going to play out right before the 2020 elections. The entire Democrat Party might want to find some safe spaces to hide from public view when the indictments start coming.

Finally, one forward looking thought. It concerns Antifa. I think there is a very real chance that this group is going to become very vocal and very nasty come next summer. If they see the election going to Trump they will start trouble across the country. The question is whether or not local police agencies will be able to control this organization. I suspect that states are going to beef up police presence at major events. Hopefully they will arrest and prosecute the bad actors. Many of these people have gotten off in recent months with little or no criminal consequences. What I want to see is the federal government going after the money backers of Antifa such as Soros. That would quickly send a message that the game is over, as is the free ride.

The Editor:  Is Trump the topic today, LL ?

Three Trump Cat:  He sure is.  He has been a busy little Twitter.  He is giving the G7 members free golf carts, and rooms for costs.  No profits involved.

More news from Disney and Trump.

Trump had thirty ( 30 ) thousand people outside of the twenty ( 20 ) thousand seat auditorium.

First, have a definite, clear practical ideal; a goal, an objective. Second, have the necessary means to achieve your ends; wisdom, money, materials, and methods. Third, adjust all your means to that end. –Aristotle

If the wind will not serve, take to the oars. –Latin Proverb

You can’t fall if you don’t climb.  But there’s no joy in living your whole life on the ground. –Unknown

We must believe that we are gifted for something, and that this thing, at whatever cost, must be attained. –Marie Curie

Too many of us are not living our dreams because we are living our fears. –Les Brown

The present structure replaced a bridge built circa 1842 that was burned during the Civil War by Sherman’s troops on July 4, 1864. It was built using a dry natural stone center pier that may have been from the previous bridge. The pier appears to have been widened for the current bridge. It was originally built as a private bridge and taken over by the county in 1888. In the 1950s, a concrete pier was added on each side of the center pier for additional support and gave the bridge the appearance of having four spans. At the same time, eight longitudinal steel I-beams were added under the floor beams to strengthen the structure. It is the longest two-span covered bridge remaining in Georgia. Repairs were completed in 1999 at a cost of $151,188.00. It carries the highest traffic rate of Georgia’s covered bridges, making it a dangerous bridge to visit. Concord Road is narrow and winding at the bridge site, affording no parking at or near the bridge. The creek is heavily wooded, with moderate exposure of the bridge at close range. It was listed on the National Register of Historic Places on November 24, 1980. In 2017, a steel frame was added inside the bridge for additional support. 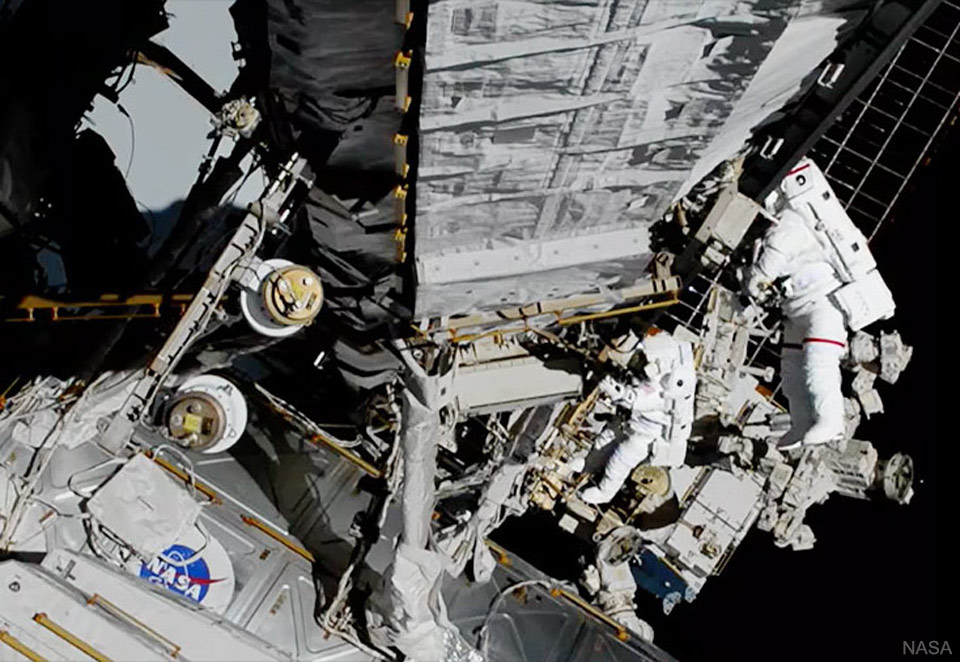 Explanation: The failed unit was beyond the reach of the robotic Canadarm2. Therefore, this repair of the International Space Station would require humans. The humans on duty were NASA’s Jessica Meir and Christina Koch. This was the fourth spacewalk for Koch, the first for Meir, and the first all-female spacewalk in human history. The first woman to walk in space was Svetlana Savitskaya in 1984. Koch (red stripe) and Meir are pictured hard at work on the P6 Truss, with solar panels and the darkness of space in the background. Working over seven hours, the newly installed Battery Charge / Discharge Unit (BCDU) was successfully replaced and, when powered up, operated normally.