WHISTLEBLOWER ERIC CIARAMELLA: IS THIS THE BEST THEY’VE GOT?

The whistleblower is now pretty well outed by investigative journalist Paul Sperry, and it’s underwhelming. He’s been identified as on Eric Ciaramella, 33, prep school grad, Yalie, Obama backwash, political operative, and fanatic Trump=hater. Hardly the Mister Probity concerned about national security that’s been painted. Sperry did the digging but pointed out that that the man’s identity had been an open secret in the Beltway, with the mainstream media doing their darnest to keep his name from being attached to his rather spectacular charges. Federal documents reveal that 33-year old Ciaremella, a registered Democrat held over from the Obama White House, previously worked with former Vice President Joe Biden and former CIA Director john Brennan, a vocal critic of President Trump who helped initiate the Russia “collusion” investigation of the Trump campaign during the 2016 election.

Ciaramella’s name should be out there because it’s relevant whether all the hearsay in his legally couched charge was actually made in good faith or was just another leftist smear job under cover of government mechanisms, same as the Steele dossier. Based on Sperry’s digging, it certainly looks like the latter.

From Sperry’s reporting, we learn that this creep wasn’t trying to make anything better within government, which is what whistleblower protections are for. He was just another leftist trying to overturn the 2016 election, and it dated from way back, starting with his propensity to leak. He got kicked out of the NSC for suspected leaking, something other people have been jailed for. It raises questions as to why the heck this guy even ended up at CIA, drawing a likely six-figure salary and big bennies. He doesn’t even sound security clearance-worthy, given his propensity to leak. Tight-lipped he wasn’t.

Because all of the news about this whistleblower the Democrats are trying to shield reveals a coordinated strategy of leaks and legal plotting. The only reason to keep Ciaramella’s name secret would be to shield the Democrats themselves from scrutiny about their pre-planned and coordinated plotting with this Trump-hating deep stater, because this whistleblowing wasn’t about malfeasance, it was all about political power. It was all coordinated, it was all preplanned with Schiff. The leaks, the hangings out with like-minded officials, the evidence of political connections, the coziness and wonderfully advantageous maneuvers with Schiff point to a tainted, politically motivated and very unreliable witness, a guy who’s supposedly a dispassionate CIA analyst but now exposed as a wannabe political operative with a very tainted political patron. What we learn ultimately from Sperry is that Schiff needs to recuse himself from his sham because he was right in the middle of it from the beginning and his efforts to keep Ciaramella’s identity secret were efforts to protect himself. As for Ciaramella, he ought to be fired, and working now for an organization more compatible with his inclinations, political operativity and bureaucratic dishonesty … some place like Fusion GPS.

Nowhere in the Constitution does it say you can impeach a president because you don’t like him.
*
*

Like Loading...
Click on to watch the moving bar graph.This is a fascinating chart.  Be sure to take the time to watch it to the end, it may surprise you.While we all like to complain about the price of fuel, this may help you understand why we are paying so much less for gasoline than much of the rest of the world. Also notice that Venezuela and Libya, once major producers, are no longer on the chart.

An old prospector shuffled into town leading an old tired mule. The old man headed straight for the only saloon to clear his parched throat.

He walked up and tied his old mule to the hitch rail. As he stood there, brushing some of the dust from his face and clothes, a young gunslinger stepped out of the saloon with a gun in one hand and a bottle of whiskey in the other.

The young gunslinger looked at the old man and laughed, saying. “Hey old man, have you ever danced?”

The old man looked up at the gunslinger and said. “No, I never did dance… never really wanted to.”

A crowd had gathered as the gunslinger grinned and said. “Well, you old fool, you’re gonna dance now.” And started shooting at the old man’s feet. The old prospector, not wanting to get a toe blown off, started hopping around like a flea on a hot skillet. Everybody was laughing, fit to be tied. When his last bullet had been fired, the young gunslinger, still laughing, holstered his gun and turned around to go back into the saloon.

The old man turned to his pack mule, pulled out a double-barreled shotgun, and cocked both hammers. The loud clicks carried clearly through the desert air. The crowd stopped laughing immediately. The young gunslinger heard the sounds too and he turned around very slowly. The silence was almost deafening.

The crowd watched as the young gunman stared at the old timer and the large gaping holes of those twin barrels, which never wavered in the old man’s hands, as he quietly said. “Son, have you ever licked a mule’s ass?”

The gunslinger swallowed hard and said.
“No, sir….. but… I’ve always wanted to!”

There are lessons here:

Whiskey makes you think you’re smarter than you are.

Always, always make sure you know who has the power.

Don’t mess with old men, they didn’t get old by being stupid.

I just love a story with a happy ending, don’t you? 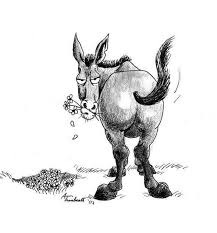 My wife and I went to the Calgary Bull Sale & Agricultural Show and one of the first exhibits we stopped at was the breeding bulls. We went up to the first pen and there was a sign attached that said,

My wife playfully nudged me in the ribs ……smiled and said, ‘He mated 50 times last year, that’s almost once a week.’

We walked to the second pen which had a sign attached that said,
”THIS BULL MATED 150 TIMES LAST YEAR’

We walked to the third pen and it had a sign attached that said, in capital letters,
‘THIS BULL MATED 365 TIMES LAST YEAR

‘My wife was so excited that her elbow nearly broke my ribs, and said,
‘That’s once a day ..You could REALLY learn something from this one.’

I looked at her and said,
‘Go over and ask him if every time was with the same old cow.’

My condition has been upgraded from critical to stable and I should eventually make a full recovery.

A woman is in bed with her lover one night when her husband comes home expectantly from his night shift. The lover panics and is looking for somewhere to hide:

The woman tell her lover to stand quietly in the corner of the bedroom and not move. She then covers him with baby oil and then talcum powder.

The husband enters the bedroom, gets undressed and as he is walking over to get into bed he notices the lover standing in the corner.

“What the hell is this?” He asks his wife.

“That is a statue that I bought today at the markets. The Smiths down the street have one just like it and I liked it so much I thought I would get one for our bedroom too.”

The husband decides he is hungry and goes down to the kitchen to make himself a sandwich.

After a while he comes back to the bedroom with a sandwich and a cup of coffee. He walks up to the lover standing in the corner and offers him the cup of coffee, saying….

“I was up at the Smiths the other night and they didn’t even offer me a glass of water!”

The Editor:  Are you ready for Halloween, LL ?

Satan Cat:  I sure am.  Halloween is fun, but not like in ancient Egypt.  Cats were shown the respect they deserved.

The Middle Ages were a curse on cats.  We became associated with witches and Satan.

TE:  Are you scaring kids this Halloween, SC ?

I sure am.  Costumes and things are hard to get this year.  Most witches went back to Europe until the Dems finish their hunt.  Cloven hooves and horns have all been bought by the impeachment Dems.  Sulfur and brimstone can only be found in the secret impeachment dungeon.

Here is some history.