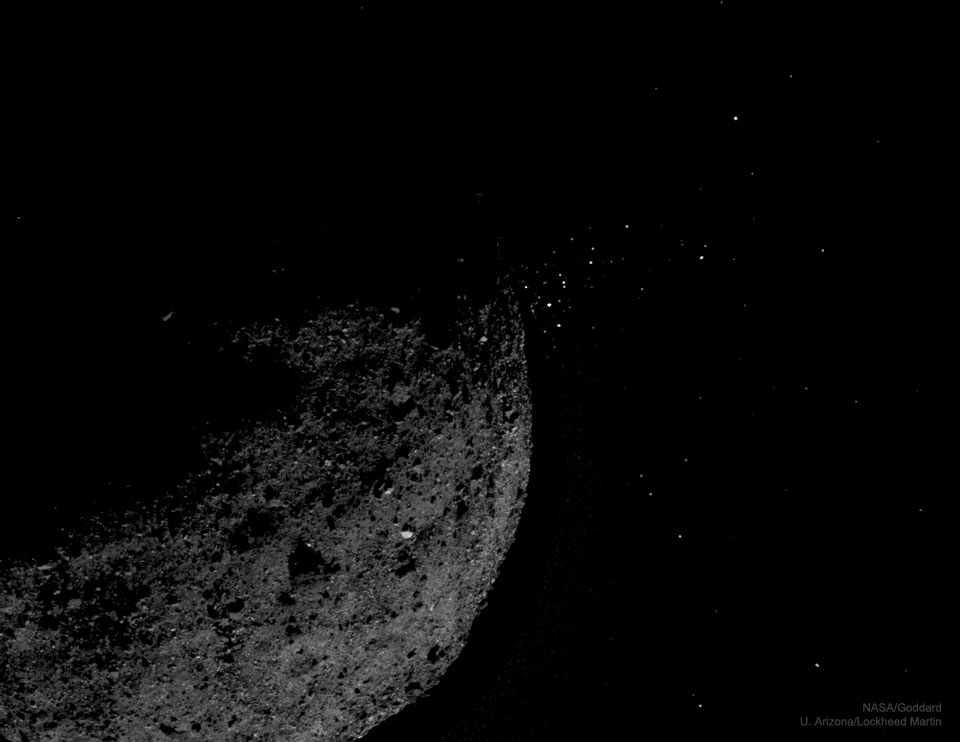 Explanation: Why does asteroid Bennu eject gravel into space? No one is sure. The discovery, occurring during several episodes by NASA‘s visiting ORISIS-REx spacecraft, was unexpected. Leading ejection hypotheses include impacts by Sun-orbiting meteoroids, sudden thermal fractures of internal structures, and the sudden release of a water vapor jet. The featured two-image composite shows an ejection event that occurred in early 2019, with sun-reflecting ejecta seen on the right. Data and simulations show that large gravel typically falls right back to the rotating 500-meter asteroid, while smaller rocks skip around the surface, and the smallest rocks completely escape the low gravity of the Earth approaching, diamond-shaped asteroid. Jets and surface ejection events were thought to be predominantly the domain of comets, responsible for their tails, comas, and later meteor showers on Earth. Robotic OSIRIS-REx arrived at 101955 Bennu in late 2018, and is planned to touchdown to collect a surface sample in October 2020. If all goes well, this sample will then be returned to Earth for a detailed analysis during 2023. Bennu was chosen as the destination for OSIRIS-REx in part because its surface shows potential to reveal organic compounds from the early days of our Solar System, compounds that could have been the building blocks for life on Earth.