After the democraps stole the presidential election and the Georgia senate election, various companies aligned with the Left to do everything they could to demonize and marginalize conservatives, despite the fact that there are some 75 million of us. Look at what happened to Parler.

Apparently they think we’re just doormats they can walk all over.

Many of these companies don’t supply goods or services directly to consumers, so we can’t easily boycott them, but one of them is MasterCard. They felt it was appropriate to announce they were going to deny their services to anything affiliated with Pres. Trump. Well, I decided that it was time to stop using my Mastercards. My monthly MC bill is usually about $2,000. This month it is $25, and next month it should be $0.00. If I can get a large number of people to join me, we can make MC regret its political actions. It’s time for a little conservative activism.

If you have an outstanding balance with MC, pay it off as quickly as possible.

Get a VISA or Discover card.

Its time to fight back against these people who believe we’re evil because we disagree with them. They have been at war with us, but we have just started to realize it, and they’re destroying our country. 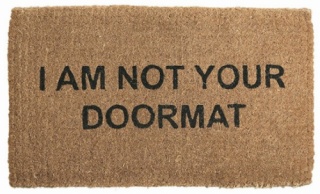