Into a Belfast pub comes Paddy Murphy, looking like he’d just been run over by a train. His arm is in a sling, his nose is broken, his face is cut and bruised And he’s walking with a limp.

“What happened to you?” asks Sean, the bartender.

” Jamie O’Conner and me had a fight,” says Paddy.

“That little shit, O’Conner,” says Sean, “He couldn’t do that to you, he must have had something in his hand.”

” That he did,” says Paddy, “a shovel is what he had, and a terrible lickin’ he gave me with it.”

” Well,” says Sean, “you should have defended yourself, didn’t you have something in your hand?”

“Mrs. O’Conner’s breast, and a thing of beauty it was, but useless in a fight.” 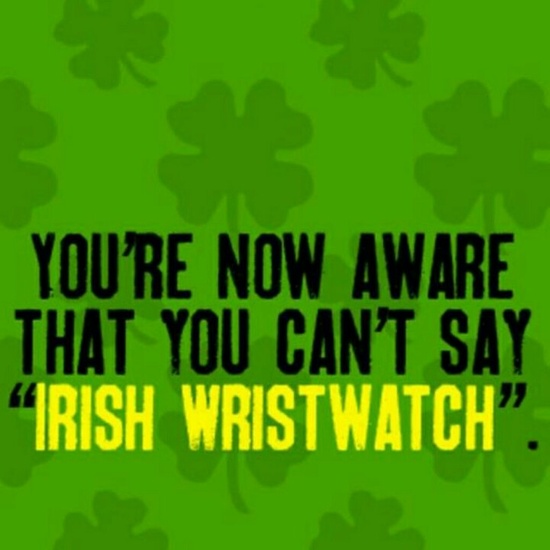 An Irishman who had a little too much to drink is driving home from the city one night and, of course, his car is weaving violently all over the road. A cop pulls him over.

“Why, I’ve been to the pub of course,” slurs the drunk.

” Well,” says the cop, “it looks like you’ve had quite a few to drink this evening.”

” I did all right,” the drunk says with a smile.

“Did you know,” says the cop, standing straight and folding his arms across his chest, that a few intersections back, your wife fell out of your car?”

“Oh, thank heavens,” sighs the drunk. “For a minute there, I thought I’d gone deaf.”


Brenda O’Malley is home making dinner, as usual, when Tim Finnegan arrives at her door.

” Of course you can come in, you’re always welcome, Tim. But where’s my husband?”

” That’s what I’m here to be telling ya, Brenda. “There was an accident down at the Guinness brewery…”

” I must, Brenda. Your husband Shamus is dead and gone. I’m sorry.”

Finally, she looked up at Tim.. “How did it happen, Tim?”

” It was terrible, Brenda. He fell into a vat of Guinness Stout and drowned.”

“Oh my dear Jesus! But you must tell me the truth, Tim. Did he at least go quickly?”


Mary Clancy goes up to Father O’ Grady after his Sunday morning service, and she’s in tears.

He says, ” So what’s bothering you, Mary my dear?”

The priest says, “Oh, Mary, that’s terrible. Tell me, Mary, did he have any last requests?”

She says, He said, ‘Please Mary, put down that damn gun..’


AND THE BEST FOR LAST

A drunk staggers into a Catholic Church, enters a confessional booth, sits down, but says nothing.

The Priest coughs a few times to get his attention but the drunk continues to sit there.

Finally, the Priest pounds three times on the wall. The drunk mumbles, “ain’t no use knockin, there’s no paper on this side either!