There’s a long history of politicians using their power to enrich their families, but according to Peter Schweizer, Joe Biden “emerges as the king of the sweetheart deal, with no less than five family members benefiting from his largesse, favorable access and powerful position for commercial gain.” These sweetheart deals include foreign partners and sometimes taxpayer dollars.

And it’s not just his son Hunter Biden. In a piece for the New York Post, Peter Schweizer details exactly how these Biden family members profited off of Joe’s political career.

James Biden, Schweizer explains, has been “an integral part of the family political machine from the earliest days when he served as finance chair of Joe’s 1972 Senate campaign.” In fact, since joining the Senate, James has accompanied him on congressional delegation trips overseas. As vice-president, Joe brought James to White House functions. “Sometimes, James’ White House visits dovetailed with his overseas business dealings, and his commercial opportunities flourished during his brother’s tenure as vice president,” writes Schweizer.

James was named executive vice president of HillStone International (a subsidiary of the huge construction management firm, Hill International) less than three weeks after the president of the company, Kevin Justice, visited the White House in 2010. James had virtually no experience with housing construction, but that mattered little, since following his being given that position, HillStone international started getting huge government contracts.

James Biden was joining HillStone just as the firm was starting negotiations to win a massive contract in war-torn Iraq. Six months later, the firm announced a contract to build 100,000 homes. It was part of a $35 billion, 500,000-unit project deal won by TRAC Development, a South Korean company. HillStone also received a $22 million U.S. federal government contract to manage a construction project for the State Department.

It was the most lucrative contract the firm ever acquired.

Most people are probably aware that Hunter Biden got a lucrative board position at Ukrainian gas company Burisma Holdings, despite having zero relevant experience., and “earning” over $80,000 a month while the company sought to exploit their Biden connection.

But there’s more to Hunter Biden’s get-rich-quick exploitations of his father position as vice president of the United States. “With the election of his father as vice president, Hunter Biden launched businesses fused to his father’s power that led him to lucrative deals with a rogue’s gallery of governments and oligarchs around the world. Sometimes he would hitch a prominent ride with his father aboard Air Force Two to visit a country where he was courting business,” explains Schweizer. “Other times, the deals would be done more discreetly. Always they involved foreign entities that appeared to be seeking something from his father.”

Schweizer details Hunter Biden’s involvement with business partner Devon Archer and Burnham Financial Group. “Burnham became the vehicle for a number of murky deals abroad, involving connected oligarchs in Kazakhstan and state-owned businesses in China.” Archer was arrested in May 2016 in connection to the scheme. “Although Hunter Biden was not charged in the case, his fingerprints were all over Burnham. The ‘legitimacy’ that his name and political status as the vice president’s son lent to the plan was brought up repeatedly in the trial.”

In June 2011, StartUp Health, an investment consultancy was “barely up and running” when “two of the company’s executives were ushered into the Oval Office of the White House. They met with President Barack Obama and Vice President Joe Biden.” The day after their meeting with Obama and Biden, the fledgling company was “featured at a large health care tech conference being run by the U.S. Department of Health and Human Services (HHS), and StartUp Health executives became regular visitors to the White House, attending events in 2011, 2014 and 2015.
How did they get such a high-profile meeting and get propelled into success so easily? The chief medical officer of StartUp Health, Howard Krein, is Joe Biden’s son-in-law.

Vice President Joe Biden continued to help Krein promote his company at several appearances through his last months in the White House, including one in January 2017, where he made a surprise showing at the StartUp Health Festival in San Francisco. The corporate event, open only to StartUp Health members, enabled the 250 people in attendance to chat in a closed session with the vice president.

It pays to be connected to Joe Biden, that’s for sure.

Remember how Joe Biden became the Obama administration’s point man for matters involving Ukraine, and that was crucial for Hunter Biden being put on the board of Burisma, and getting that pesky prosecutor investing Burisma fired? Well, Joe Biden was also the administration’s point man in Latin America and the Caribbean, and that just so happened to work out handsomely for Joe’s brother, Frank Biden, who was working deals down in Costa Rica at the same time. In March 2009, Joe Biden visited Costa Rica. Within months of that visit, “Costa Rica News announced a new multilateral partnership ‘to reform Real Estate in Latin America’ between Frank Biden, a developer named Craig Williamson, and the Guanacaste Country Club, a newly planned resort.”

“Frank’s vision for a country club in Costa Rica received support from the highest levels of the Costa Rican government— despite his lack of experience in building such developments,” Schweitzer discovered. “He met with the Costa Rican ministers of education and energy and environment, as well as the president of the country.” Frank Biden’s deals in Latin America and the Caribbean continued to flourish after that.

Prior to piggybacking off of Barack Obama’s popularity to become Vice President, Joe’s sister Valerie ran his Senate campaigns and his 1988 and 2008 presidential campaigns. As a senior partner in the political messaging firm named Joe Slade White & Company, which had an eighteen-year history with Biden and his campaigns. “The firm received large fees from the Biden campaigns that Valerie was running. Two and a half million dollars in consulting fees flowed to her firm from Citizens for Biden and Biden For President Inc. during the 2008 presidential bid alone.”

“I am confident that all people who read Tolley’s Topics are smart enough to realize that all this Joe business did not take place without the knowledge and approval of obama. When President Trump finally gets that Swamp drained…..obama and Joe will be floating in the smelly marsh…….side-by-side.”
-Sheila Tolley- 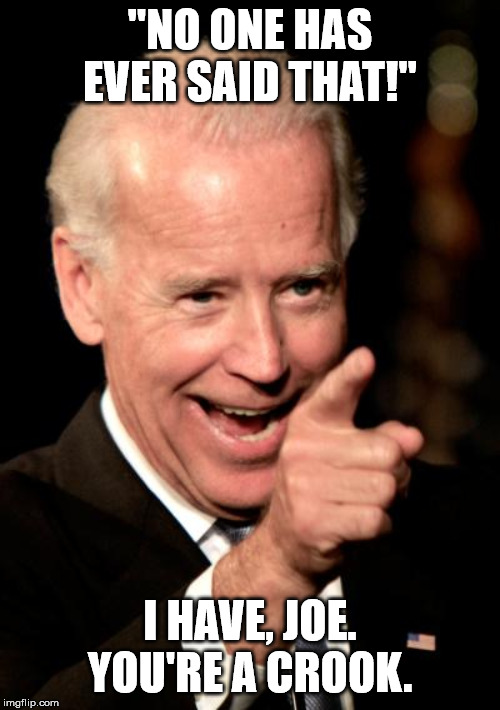 Challenges are what make life interesting and overcoming them is what makes life meaningful. –Joshua J. Marine

If you want to lift yourself up, lift up someone else. –Booker T. Washington

Limitations live only in our minds.  But if we use our imaginations, our possibilities become limitless. –Jamie Paolinetti

You take your life in your own hands, and what happens? A terrible thing, no one to blame. –Erica Jong