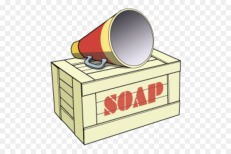 If you are an unfortunate democrat who accidentally pressed the wrong button and somehow found yourself on my blog…please do me a favor after you hasten yourself away.

Please send your previous shamed, cheating, DNC ex-chairwoman, Donna Brazile, a Book of Quotes. She has worn this quote out: “You can preach to the choir but you can’t reach the congregation unless you know the songs.”

Evidently the words to Donna Brazile’s cheating songs did not resonate with Crooked Hillary or the democrat congregation.

Hillary knew the questions and still failed the exam….and Joe is hiding in his basement.

One thought on “ON MY SOAPBOX…Preaching to the choir”