The NFL is adding We Care to their name–NFLWC.

The Lets See How Much The Mr. Fauci Earns Editor:  What does our Fauci Dung Beetle earn, LL ?

The Poor As A Church Mouse Cat:  He is the highest paid government employee in America.

I hope Fauci lives long enough for the truth to come out.

Trump, not being a professional politician, learned his lesson about swampers/Rinos.

Anyone who talks about codifying abortion or any federal laws is retarded.  The Supremes just said that it is a right of the states—not of the feds.  If they want to pass a law they have HOR, Senate, and Presidential Democrats in power now—pass it.  Just STFU about abortion and guns.

Joe loves Xi Jinping ( his banker ).  The only thing the dems have messed up more than American domestic policy is foreign policy.  If they believed in an after-life it would be screwed up.

It’s too late Barack, your hate filled wasted legacy is set in stone.  You and Clinton were too arrogant to be remembered for much of anything.  It must be election time.

Kari is the woman for today, no more Nancy, Jill, Maxine, Hillgal, Pocahontas, etc., their time has passed.

Get these commies out of public office.  Gitmo is a good place.

Airlines should charge obese people for a second seat, or in this case split the cost of the center seat and let the woman sit in the pilot’s lap.

The Devil incarnate, Chuck Schumer, is acting like he once flew commercial.  One thing Chuckie wants is space for his horns, pointy tail, and cloven hooves.

Protestors should be marching at the acting Secretary of State’s home 24/7, like protesters did at the home of the Supremes.

The schools are the parents/children schools.  Put a clause in the contract about no CRT/similar crap, and no mention of sex or gender B.S.  Film all classes and school property.

Warnock, like Stacey, is a slimy lizard loser.  The Republicans should watch the Fulton and DeKalb county ballots.

The Rainers are taking back Russian occupied territory.

Life isn’t about getting and having, it’s about giving and being. –Kevin Kruse

Life is what happens to you while you’re busy making other plans. –John Lennon

We become what we think about. –Earl Nightingale

Twenty years from now you will be more disappointed by the things that you didn’t do than by the ones you did do, so throw off the bowlines, sail away from safe harbor, catch the trade winds in your sails. Explore, Dream, Discover. –Mark Twain 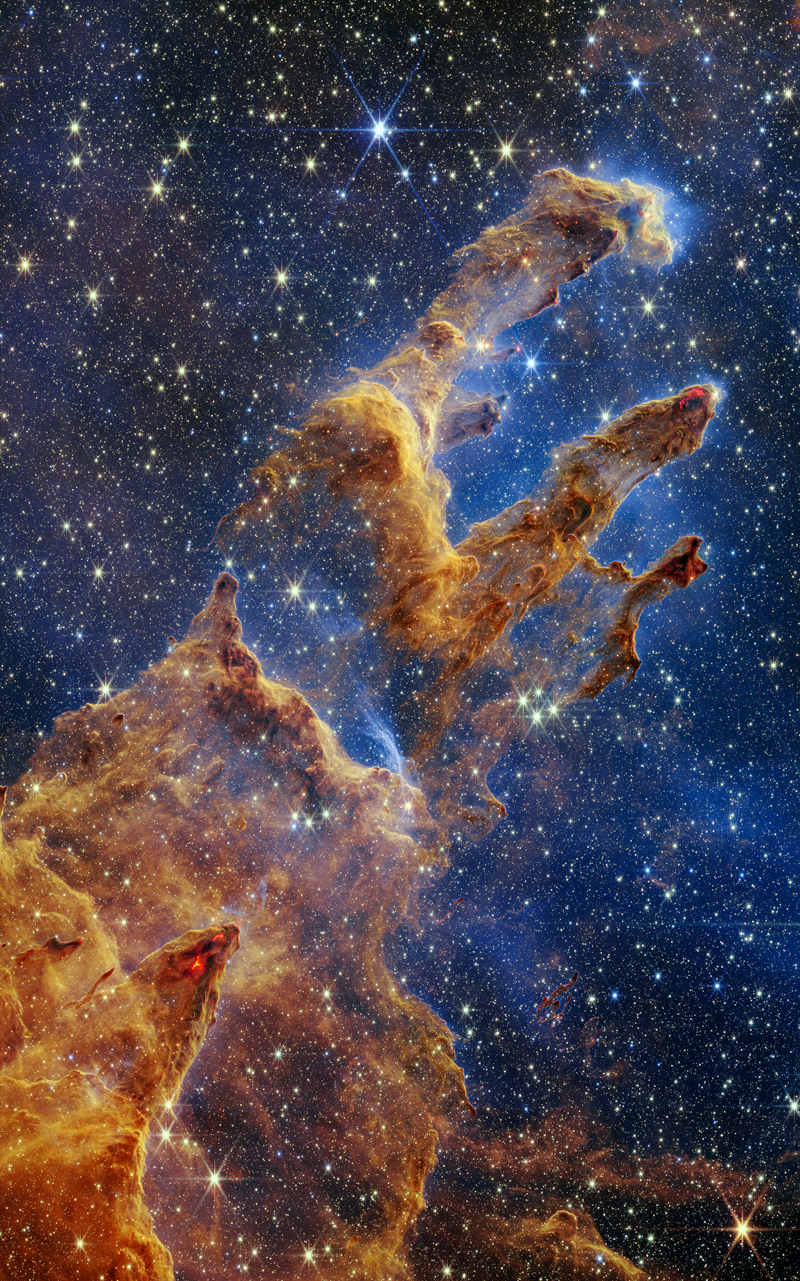 Explanation: A now famous picture from the Hubble Space Telescope featured these star forming columns of cold gas and dust light-years long inside M16, the Eagle Nebula, dubbed the Pillars of Creation. This James Webb Space Telescope NIRCam image expands Hubble’s exploration of that region in greater detail and depth inside the iconic stellar nursery. Particularly stunning in Webb’s near infrared view is the telltale reddish emission from knots of material undergoing gravitational collapse to form stars within the natal clouds. The Eagle Nebula is some 6,500 light-years distant. The larger bright emission nebula is itself an easy target for binoculars or small telescopes. M16 lies along the plane of our Milky Way galaxy in a nebula rich part of the sky, toward the split constellation Serpens Cauda (the tail of the snake).