I feel lower than a gopher hole.
I feel so low I couldn’t jump off a dime.
She eats sorrow by the spoonful.
You look like you were sent for and couldn’t go.
Sad enough to bring a tear to a glass eye.
He looks like the cheese fell off his cracker.

She’s frying size.
He’s knee-high to a grasshopper.
He’d have to stand up to look a rattler in the eye.
About as big as the little end of nothing.
Half as big as a minute.
No bigger than moles on a chigger.
Scrawny as Ace Reid cattle.
Nothing between the horns and hooves but hide.
Thin as a bar’s ear.
Thin as a gnat’s whisker.
Thin as store-bought thread.
Thin as Depression soup.
Thin as a fiddle string.
Thin as a rake and twice as sexy.
Flat as a fritter.
Scarce-hipped.
So skinny she has to stand twice to make a shadow.
So skinny you could give her a Big Red and use her as a thermometer.
So skinny she shades herself under the clothesline.

He’s such a liar he’d beat you senseless and tell God you fell off a horse.
He was born sorry.
He’s so low he’d steal the widow’s ax.
He’d steal his mama’s egg money.
He’d steal the flowers off his grandma’s grave.
He’d steal the nickels off a dead man’s eyes.
No-account fellow.
Bitter as gall.
Tough as nickel steak.
Tough as stewed skunk.
Tough as whang.
Mean as a mama wasp.
Friendly as a bramble bush.
She makes a hornet look cuddly.
A she-bear in satin.
Rough as a cob.
He looks like a sheep-killing dog.
He lies like a tombstone.
He wouldn’t scratch his own mama’s fleas.
He’s got horns holding up his halo.
We’re not on borrowing terms.
You’re so low you have to look up to see hell.
He’s so low you couldn’t put a rug under him.
He jumped on me with all four feet.
A real revolving son of a bitch.

His breath’s so strong you could hang out the washing on it.
Illustration by Regan Dunnick 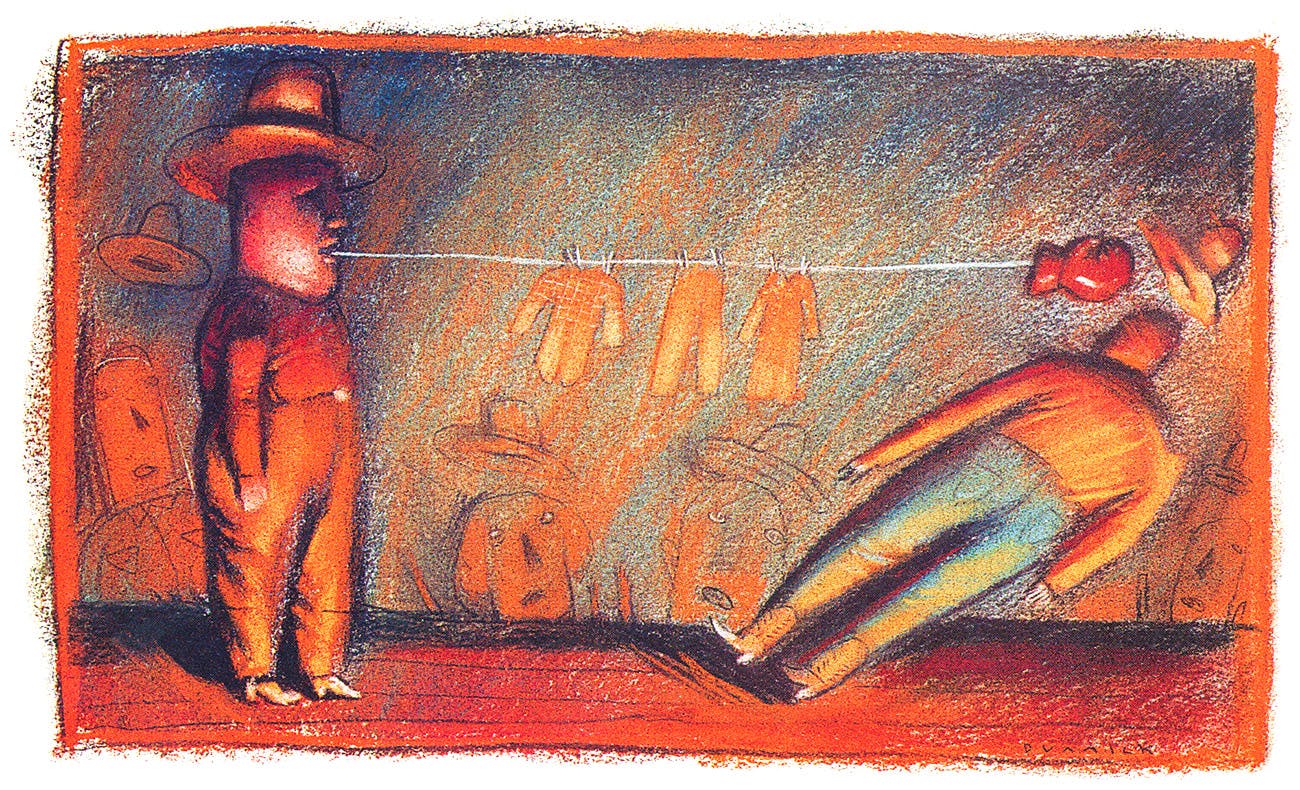