NANCY PELOSI WILL HAVE A HARD TIME GOING FORWARD

Up to now, the Democrats have had the best of all worlds. As they say in baseball, they’re been swinging against the batting practice pitcher. As any major-leaguer will tell you, the pitches break a little differently when there is a guy on the mound trying to get you out. Well, that’s where we are now that the Democrats have decided to proceed with articles of impeachment. In other words, they will need a lot more than partisan hacks pretending to be scholars to persuade the American people. President Trump is already calling their bluff: “Trump Challenges ‘Do nothing Democrats’: If You Are Going to Impeach Me , Do it now. Fast.”

Speaker Pelosi will face another task: how do we get to 218, or the mere majority required? First she want get a single GOP vote. The hearings were such a sham that they turned off any potential moderate willing to go along with an impeachment vote. Second, she will have to persuade the public, and it may be difficult, as we saw in this recent poll: Many Americans appear to have made up their minds about whether Trump committed an impeachable offense, but what do they think should happen to Trump next? This time, we asked respondents how they thought the impeachment process should end for Trump: Should he be impeached by the House and removed from office by the Senate? Or should his fate be decided in the 2020 election? Respondents were slightly more likely to say that the voters should determine what happens to Trump’s presidency (51 percent), while 47 percent said Congress should impeach him and remove him from office.

And that’s the challenge for Democrats! It appears that Americans would rather wait until November and settle this at the ballot box. So, let’s see what happens! My money is on Trump surviving and winning politically.

I received a message on my cell phone from one of the local television stations in Atlanta that read: The Atlanta Child Murders Suspect Wayne Williams was Denied Parole. When you are convicted of a crime, you are no longer considered a suspect. The main stream media has never accepted the fact that a black person committed and was convicted of these crimes. It had to be a member of the Ku Klux Klan or some other white supremacist group.

“The welfare state is the oldest con game in the world. First you take the people’s money away quietly, and then you give some of it back to them flamboyantly.”

As you may recall, I previously published the phone number by which….Jack Ass, Georgia Governor, Brian Kemp, could be reached. I published the number before the Idiot appointed Kelly Loeffler to replace Isakson in the Senate. Kemp bucked the wishes of President Trump and his allies when he made his decision.

After the publication of the number, I received feedback from many readers who did take the time to call the number. The indication was that Kemp’s office was getting inundated with calls AGAINST the selection of Loeffler to replace Isakson.

The following is a letter from a contributor to Tolley’s Topics. She makes her disappointment in Kemp’s decision very clear. I am very proud of Cathy for her call. I have repeated the number at the end of this post, just in case you missed it previously.

Sheila,  I just made a call to Gov Kemp’s Office and talked to a very nice lady. I talked to her about 1 and 1/2 minute’s.  I started out by saying I would like to make a comment and wanted to know if my comment will be passed on to the Governor.  She said yes.  I said good.  I then said,

“I want to express my disappointment in Brian Kemp, for me, my husband, children and Grand children that voted for him.  We all are disappointed in his selection of this woman to fill Johnnie Isakson’s Senate seat.  We remember watching all his campaign ads on TV and thinking that he was a tough guy, like Trump.  Our Country needs tough guys.  We feel that he has made a big mistake, and really fear that this woman could be the ONE that votes against Trump on the Senate floor.  We also want him to know that I have been talking with all my family and neighbors and we all are unhappy with his choice and he needs to know that come 2022 we will not give him our votes.  If Kemp is not on the Trump Train then he is against President Trump.  Personally I like tough men.  Will you please be sure that he knows my comments?”  She said yes, and asked was their anything else that she could help me with. I said “no, I thank you very much and you have a blessed day.”

She sounded very sad when she spoke with me.  I think it would be good to encourage your Tolley’s Topics readers to also call and express their disapproval, regrets, and disappointment in Brian Kemp.  Republicans need to start understanding that we need to rise up and start taking a stand, we have been meek far too long. It is time to fight back for our party and Country…Or we will find our selves like the North Koreans.

Make the call and raise a little Hell of your own…after all you do pay Brian Kemp’s, and will soon pay, Kelly Loeffler’s salary.

As Is Cat:  It sure is, here are some interesting things.  First, the NBA is losing paying customers because they love commies more than Americans.

The FDA sleeping with companies it is chartered to regulate for safety is nothing new.

This is another example of government oversight failings.  It makes for big campaign contributions.

Drudge has puzzled Amigo for months.  They have picked up the Trump bashing of the MSM.  Amigo seldom uses them anymore.

China is not a friend, but we know that.

Who will give up money and power to join the world government ? 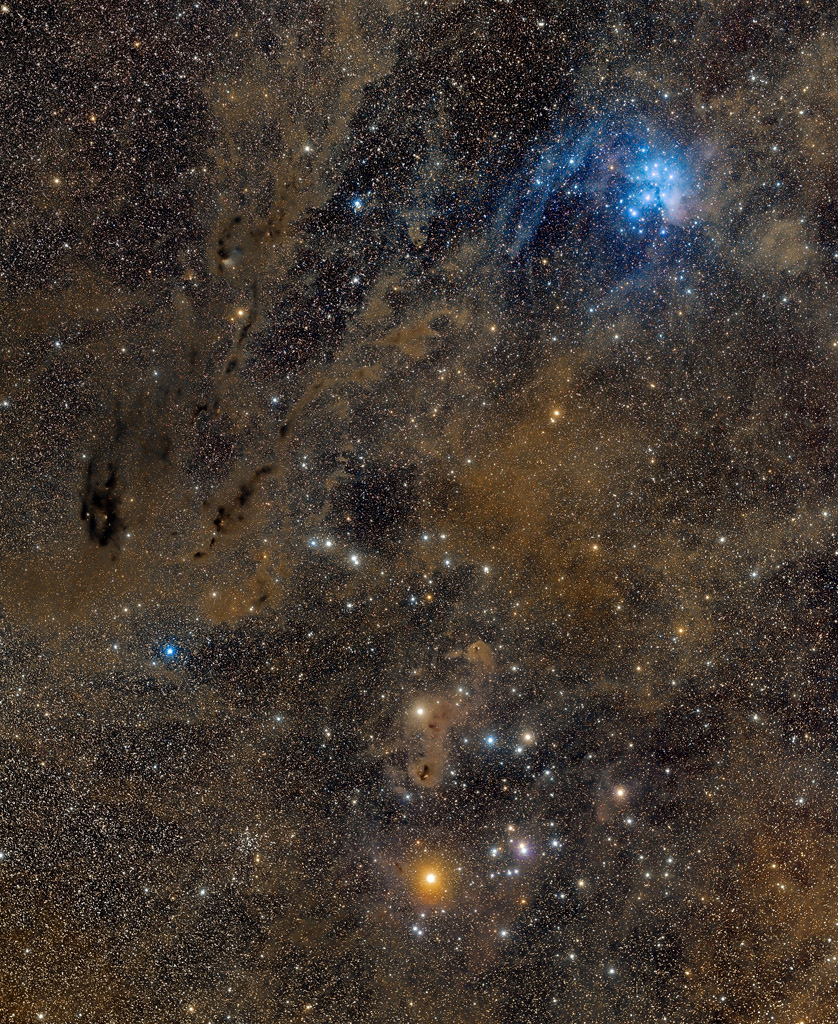 Explanation: This cosmic vista stretches almost 20 degrees from top to bottom, across the dusty constellation Taurus. It begins at the Pleiades and ends at the Hyades, two star clusters recognized since antiquity in Earth’s night sky. At top, the compact Pleiades star cluster is about 400 light-years away. The lovely grouping of young cluster stars shine through dusty clouds that scatter blue starlight. At bottom, the V-shaped Hyades cluster looks more spread out in comparison and lies much closer, 150 light-years away. The Hyades cluster stars seem anchored by bright Aldebaran, a red giant star with a yellowish appearance. But Aldebaran actually lies only 65 light-years distant and just by chance along the line of sight to the Hyades cluster. Faint and darkly obscuring dust clouds found near the edge of the Taurus Molecular Cloud are also evident throughout the celestial scene. The wide field of view includes the dark nebula Barnard 22 at left with youthful star T Tauri and Hind’s variable nebula just above Aldebaran in the frame.