These great questions and answers are from the days when ‘ Hollywood Squares’ game show responses were spontaneous, not scripted, as they are now. Peter Marshall was the host asking the questions, of course.

A. Paul Lynde: If you hold their little heads under water long enough.

Q. If you’re going to make a parachute jump, at least how high should you be?

A. Charley Weaver: Three days of steady drinking should do it.

A. George Gobel: Boy, it sure seems that way sometimes.

Q. You’ve been having trouble going to sleep. Are you probably a man or a woman?

A. Don Knotts: That’s what’s been keeping me awake.

Q. According to Cosmopolitan, if you meet a stranger at a party and you think that he is attractive, is it okay to come out and ask him if he’s married?

A. Rose Marie: No. Wait until morning.

Q. Which of your five senses tends to diminish as you get older?

A. Charley Weaver: My sense of decency.

Q. In Hawaiian, does it take more than three words to say ‘I Love You’?

A. Vincent Price: No, you can say it with a pineapple and a twenty.

A. George Gobel: I don’t know, but it’s coming from the next apartment.

Q. As you grow older, do you tend to gesture more or less with your hands while talking?

A. Rose Marie: You ask me one more growing old question Peter, and I’ll give you a gesture you’ll never forget.

A. Paul Lynde: Because chiffon wrinkles too easily.

Q. Charley, you’ve just decided to grow strawberries. Are you going to get any during the first year?

A. Charley Weaver: Of course not, I’m too busy growing strawberries.

Q. It is considered in bad taste to discuss two topics at nudist camps. One is politics, what is the other?

Q. During a tornado, are you safer in the bedroom or in the closet?

A. Marty Allen: Only after lights out.

Q. When you pat a dog on its head he will wag his tail. What will a goose do?

A. Paul Lynde: Make him bark?

Q. If you were pregnant for two years, what would you give birth to?

A. Paul Lynde: Whatever it is, it would never be afraid of the dark.

Q. According to Ann Landers, is there anything wrong with getting into the habit of kissing a lot of people?

A. Charley Weaver: It got me out of the army.

Q. It is the most abused and neglected part of your body, what is it?

A. Paul Lynde: Mine may be abused, but it certainly isn’t neglected.

Q. Back in the old days, when Great Grandpa put horseradish on his head, what was he trying to do?

A. George Gobel: Get it in his mouth.

Q. Who stays pregnant for a longer period of time, your wife or your elephant?

A. Paul Lynde: Who told you about my elephant?

Q. When a couple have a baby, who is responsible for its sex?

A. Charley Weaver: I’ll lend him the car, the rest is up to him.

Q. Jackie Gleason recently revealed that he firmly believes in them and has actually seen them on at least two occasions.  What are they?

A. Charley Weaver: His feet.

Q. According to Ann Landers, what are two things you should never do in bed?

A. Paul Lynde: Point and laugh.

Q. Paul, what is a good reason for pounding meat?

(The audience laughed so long and so hard it took up almost 15 minutes of the show!)

“There are a number of mechanical devices which increase sexual arousal, particularly in women. Chief among these is the Mercedes-Benz SL500.”
Frank Sinatra

“It isn’t premarital sex if you have no intention of getting married.”
George Burns

“My mother never saw the irony in calling me a son-of-a-bitch.”
Jack Nicholson

“Clinton lied. A man might forget where he parks or where he lives, but he never forgets oral sex, no matter how bad it is.”
Barbara Bush

“Ah, yes, divorce, from the Latin word meaning to rip out a man’s genitals through his wallet.”
Robin Williams

“There’s a new medical crisis. Doctors are reporting that many men are having allergic reactions to latex condoms. They say they cause severe swelling. So what’s the problem?”
Dustin Hoffman

“See, the problem is that God gives men a brain and a penis and only enough blood to run one at a time.”
Robin Williams

“It’s been so long since I’ve had sex, I’ve forgotten who ties up whom.”
Joan Rivers

Sex is one of the most wholesome, beautiful and natural experiences money can buy.
Steve Martin

You don’t appreciate a lot of stuff in school until you get older. Little things like being spanked every day by a middle-aged woman. Stuff you pay good money for later in life.
Bob Hope

“Bigamy is having one wife too many. Monogamy is the same.”
Oscar Wilde

Joe and his weenies can’t handle China.  Joe and Hunter are just two of their bed mates.

What is the big deal ?  Just like the border, laws aren’t followed.

DeSantis said he might make Disney World a home for the homeless.

DeBlasio wants to run for the HOR seat that, criminal Jerry Nadler, lost to redistributing. Jerry, like Nancy, wants to die behind his desk.

Maybe the CDC or NIH could send a few Doctors to check on this cluster.

Manchin is mostly a great American.

The Ministry of Truth is penalized for plagiarism.  She will probably go to Google to continue censoring.

The rest of the world must have a stupid shortage, for America to have so many in government.

This will be better than a Green Bean Casserole.

The Dirt Editor:  What is amazing about soil, LL ?

The Dirt Dobber Cat:  One species of wasps makes a home from soil.  One of my human first-cousins was doing his crack-cocaine on a table on the front porch when a Dirt Dobber picked it up and flew to Dobberheaven.  Said cousin, never recovered his rock.

Soil has its own little environment, if left unpoisoned.

If Congress can get by without bribes from chemical companies we might see this one day, along with less cancer, autism, etc.

Save those house plants, and you might postpone pushing up daisies.

These are from Cambodia.  I guess love in any language is still love. 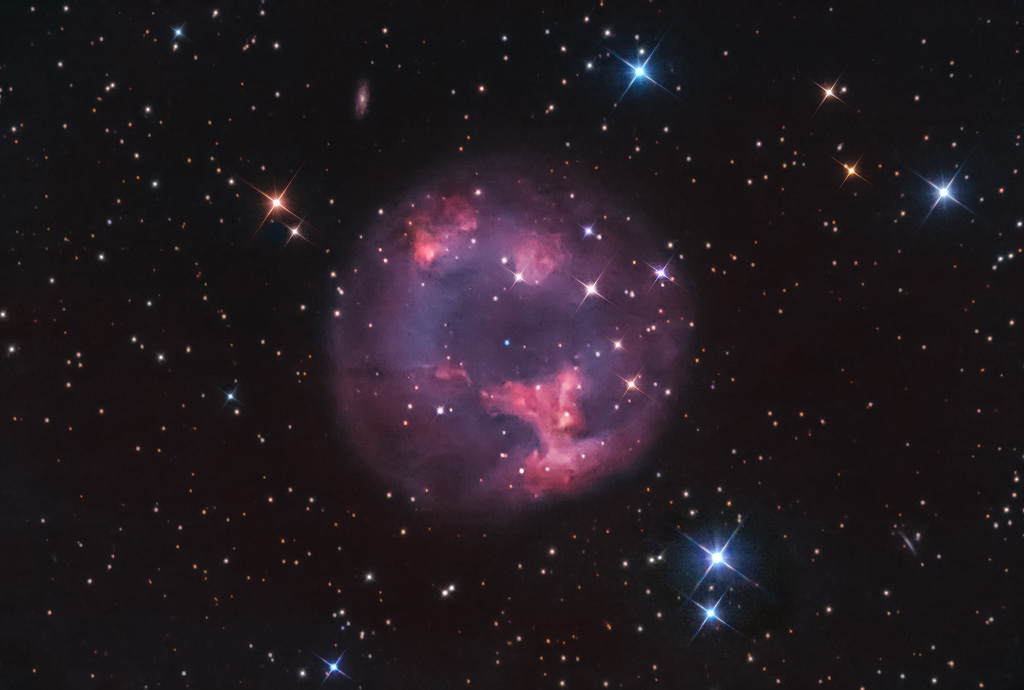 Explanation: Very faint planetary nebula Abell 7 is some 1,800 light-years distant, just south of Orion in planet Earth’s skies in the constellation Lepus, The Hare. Surrounded by Milky Way stars and near the line-of-sight to distant background galaxies, its generally simple spherical shape, about 8 light-years in diameter, is outlined in this deep telescopic image. Within its confines are beautiful, more complex details enhanced by the use of narrowband filters. Emission from hydrogen is shown in reddish hues with oxygen emission mapped to green and blue colors, giving Abell 7 a natural appearance that would otherwise be much too faint to be appreciated by eye. A planetary nebula represents a very brief final phase in stellar evolution that our own Sun will experience 5 billion years hence, as the nebula’s central, once sun-like star shrugs off its outer layers. Abell 7 itself is estimated to be 20,000 years old. Its central star is seen here as a fading white dwarf some 10 billion years old.

Tomorrow’s picture: Tsunami on the Sun