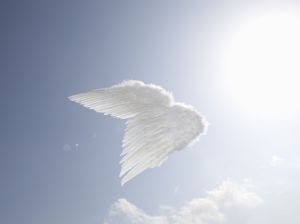 Jackie B. believes that her guardian angel came to her aid on two occasions to help her avoid serious injury. According to her testimony, she actually physically felt and heard this protective force. Both encounters happened when she was a child of kindergarten age.

The first experience took place at a popular sledding hill, where Jackie was enjoying the day with her family. The young girl decided to try sledding down the steepest part of the hill. She closed her eyes and started down.

“I apparently hit someone going down and I was spinning out of control. I was heading for the metal guardrail. I didn’t know what to do,” says Jackie. “I suddenly felt something push my chest down. I came within less than a half inch of the rail but didn’t hit it. I could have lost my nose.”

Jackie’s second experience occurred during her birthday celebration at school. She had run across the playground to place her crown on a bench. While running back to her friends, three boys tripped her.

The playground was filled with metal objects and wood chips. Jackie went flying, and something hit her just below the eye.

“But I felt something pull me back when I fell,” Jackie says. “The teachers said that they saw me sort of fly forward then fly back at the same time. As they hurried me to the nurse’s office, I heard an unfamiliar voice keep telling me, ‘Don’t worry. I’m here. God doesn’t want anything to happen to his baby.'”